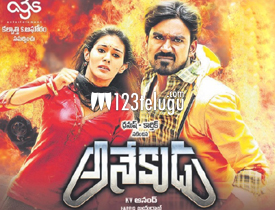 Young hero Dhanush, is making his presence felt in Tollywood off late. After the moderate success of Pandem Kollu, he is back again with Anekudu. This film is directed by K V Anand of Rangam fame and has hit the screens today. Let’s see how it is.

Madhumita(Amyra Dastur) is a creative head in a leading online gaming company. She has a unusual power of remembering things from her previous births. One fine day, Ashwin(Dhanush) joins her company as a system admin and as soon as she spots him, Madhumita immediately relates Ashwin to her previous births.

She keeps nagging Ashwin about this and forces him to believe it. An irritated Ashwin initially ignores all this but later comes across an aspect which relates back to the story narrated by Madhumita. A curious Ashwin then does some research and finds out that his love stories from these previous births had a bad ending because of his current boss Kiran(Karthik).

Who is Kiran ? What does he have to do with Madhu and Ashwin ? Does Ashwin find out the actual truth behind all this ? That forms the rest of the story.

Performance by the lead pair is top notch. Dhanush is superb and looks different in all his roles. The way he has gone about each character is quite interesting. His getup, performance in the role of Kali is especially outstanding. Amyra gives good support to Dhanush and looks beautiful in the songs. The chemistry shared between the lead pair is also very good.

The problems faced by today’s youth have been showcased quite well. Screenplay of the film is a huge plus, and all the scenes which go back and forth in time have been executed well. Production values are very good as the film looks quite rich. First half of the film is entertaining and the way suspense has been maintained is also engaging.

Climax of the film is ordinary and below par. Once the twist in the tale is revealed, the film gets hugely predictable. Pace of the film also bogs down during the second half, and all the scenes are dragged to the core. Director K V Anand nicely builds up the suspense elements till the first half but loses control during the ending stages.

Anekudu lacks regular entertainment. If the makers could have added some comedy the output could have been even better. Scenes building up to the climax are boring and have no proper flow. There is a bit of a Tamil flavor especially during the Burma episode. Aishwarya Dewan’s character lacks the necessary effect.

Harris Jayraj’s music is pretty good as all the songs have been composed and shot well. Background score is apt and suits the mood of the film. As said earlier, production values are top notch as the makers have spent enough to make their film look rich.

Screenplay of the film is good and manages to impress. Director K V Anand makes a decent effort and narrates the film aptly till in the interval point. But once he reveals the plot, all his scenes get predictable and causes hindrance to the tempo of the film.

On the whole, Anekudu has an intriguing story and some decently engaging moments. Dhanush’s stunning performance and a gritty first half are basic assets. On the flip side, a predictable and lack luster second half spoils the mood of the film. Finally, you can give this film a shot if you have absolutely nothing else to do.