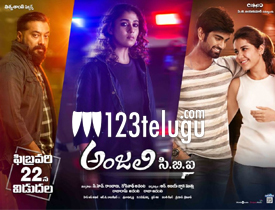 Nayantara’s Tamil action thriller, Imaikkaa Nodigal has been dubbed in Telugu as Anjali CBI. The film has hit the screens today. Let’s check what worked and what didn’t for this film.

Rudra(Anurag Kashyap) a serial killer, becomes a headache for the CBI department by kidnapping kids of high-profile families in Bangalore city. Fed up with his acts, the department engages a sincere officer called Anjali(Nayanthara) to solve the case. Who is Rudra? What is his motive behind the serial murders? How will Anjali trace the intelligent and super smart Rudra? That forms the rest of the story.

Bollywood director, Anurag Kashyap is too good in his role as an intelligent serial killer. His body language and screen presence brings a lot of depth to the proceedings.

As usual, Nayanthara did a commendable job as the CBI officer. All the mind game scenes between Nayan and Anurag Kashyap have come out really well. Nayantara’s acting in one particular scene in the flashback is enough to say how she carries any given role with utmost perfection.

Young hero, Atharvaa gets a meaty role and performed in an impressive manner. Rashi Khanna is cute and did a decent job in her limited screen presence. Critically acclaimed star, Vijay Sethupathi’s cameo at a crucial junction of the film is good.

As the film is all about tracing out a mysterious killer, most of the film runs on a serious note which may not go well with all sections of the audience. Though the love track between Atharvaa and Raashi is amusing, it comes as a speed break to the intense narration.

After a racy and engaging first half, the second half’s narration looks a bit lengthy with too many twists. Lack of commercial format is also a minus point.

Director Ajay Gnanamuthu’s vision and his paperwork is clearly visible on the screen. Though his story is a similar one like any other crime thrillers, Ajay succeeded to an extent in writing a racy and engaging screenplay. The way film opens and how all the twists in the tale are revealed is nice.

Editing by Bhuvan Srinivasan is good but he could have kept the love track between Atharvaa and Raashi short and sweet by chopping it slightly.

Cinematography by R. D. Rajasekhar is brilliant as he captured the mood of the film in a proper manner. Music by Hiphop Tamizha is not up to the mark as two songs which come in the proceedings are not catchy but his background score is impressive in parts. Production values for this limited budget film are rich.

On the whole, Anjali CBI is an appealing mystery thriller which has a racy narration in the first half. Though the twits revealed in the latter half are good, the slow proceedings takes the film down. All those who like thrillers with serious narration can give it a try but others can skip it and watch when it is aired on TV.