Review : Antham – A botched up thriller 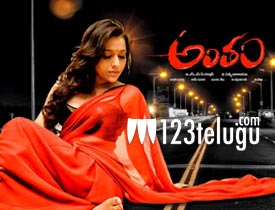 Rashmi Gautham is one of the most sought after anchors in the TV world, but she is still looking for success on the silver screen. After oozing glamour in Guntur Talkies, the actress is back with a romantic thriller titled Antham. Also starring Charandeep, the film has raised expectations with its steamy trailers, but will the movie live up to the expectations? Let’s see.

Kalyan (Charan) and Vanitha (Rashmi Gautham) are a working couple who live a happy life in Hyderabad. One fine day, Kalyan goes to Vijayawada for work, leaving his wife in Hyderabad. During his return journey, an unknown person (Vasudev) calls Kalyan and threatens to kidnap Vanitha if Kalyan does not oblige his demands.

With no choice left and worried about the safety of his wife, Kalyan agrees to follow the instructions given by this unknown person. Who is this unknown person? How is he related to Kalyan and Vanitha? What does Kalyan have to do to save his wife? These questions form the crux of the story.

The biggest asset of Antham is the short and crisp runtime. Sudharshan’s comedy provides major entertainment and his signature dialogue gives a few giggles.

Charandeep, who is usually seen in villain roles, does an okay job. Rashmi has nothing much to do as she only appears for around half an hour in the film.

The main storyline of the film is pretty weak. Such stories should have strong emotions and an exciting screenplay and unfortunately, the director fails in providing both these aspects. The film gets slower and slower as it moves forward. The story is stretched beyond a point and gets painful.

The suspense of the film is also irritating to watch. The makers have also mislead the audience by advertising the film as an thriller but Rashmi is barely seen in the film. They have tried to pull in the audience with a false propaganda.

There is nothing much to talk about the technical aspects of Antham. The production values of the film are below average. Music by Karthik is stale. Editing is a choppy and a better job could have been done. Camera work is just okay. Dialogues are crummy.

Coming to director Kalyan, he tried to handle all the major technical aspects of the film like screenplay, story, editing, VFX and directing. When someone tries to do everything at once, the quality will drastically be reduced and this shows up clearly on the big screen. Kalyan fails in providing a thrilling movie and fizzles out in all aspects possible.

On the whole, Antham is basically made up of six scenes and one song and is stretched beyond imagination. The movie totally lacks in emotion and the screenplay is atrocious. Barring the misleading propaganda, the film barely has anything to make it appealing. You can easily skip this film.