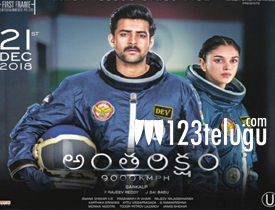 Sankalp Reddy scored a resounding hit with Ghazi on his debut. The talented filmmaker picked a space thriller as his second attempt. Titled Antariksham, this film hit the theaters today. Scroll down to check whether the film manages to keep the viewers engaged or not.

Mihira, an Indian satellite which is disfunctional, is on the course of destroying the entire communication system in the world. Now, its creator, Dev(Varun Tej) is left with no other option but to get things sorted by fixing the technical glitch.

Can Dev, along with his fellow astronauts(Aditi Rao, Satyadev, Raja Chebolu) accomplish this mission? What are the complexities they face in the process? and where does Paaru(Lavanya)feature in the set up. The answers to these questions form the remaining story of the film.

Antariksham is definitely a daring attempt in Tollywood as this genre was not explored in the past, at least on this scale. This space thriller stays true to the theme and never goes off-track.

Varun Tej gets a meaty role and he packs the intensity to match it up. He puts up his best efforts for this film. Aditi Rao is good in a supportive role and she emotes really well. Lavanya is seen in a very brief role but she leaves an impact.

The graphics are really good and the space visuals are near-to-life. The VFX designing has been executed to perfection and would most certainly give a new experience to the viewers.

The main problem with Antariksham is that it lacks proper depth. Most of the scenes relating to technical problems in the space have not been addressed properly. A detailed explanation of the problems and convincing screenplay was required to make-believe the audience.

The second half had a lot riding on it, but the drama goes missing when it matters the most. As a result, a few key scenes came out underwhelming.

Varun Tej going missing in outer space and coming back from nowhere. A satellite traveling at 7000 KMPH docking at the International Space Station with pinpoint precision. Scenes like these look a bit too far-fetched.

Antariksham banks big on special effects and boy did the team deliver. The director, Sankalp Reddy gets the best-possible output in this department. However, he should have concentrated more on the core plot rather than the visual grandeur. Nevertheless, he made a decent attempt.

Music and background score are adequate. The space thriller vibe has been carried well in the second half. Camera works are really good and give an authentic feel to the viewers.

A lot of effort has been put into the art department and they succeed big time. They have picked all the right physical properties to give a realistic setup to the satellite.

The entire team of Antariksham has put in a lot of hard work and that is very much evident on the big screen. The film does not have any commercial elements but because of the sheer imagination of the director, this film will go down as a good attempt in Tollywood. However, the overall execution is not that gripping and this makes the film a partly engaging watch this weekend.