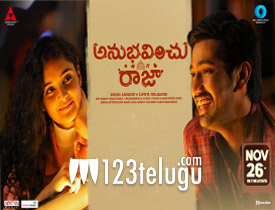 Anubhavinchu Raja has been promoted a lot in the last few days. The film is out today and let’s see how it is.

Raju(Raj Tharun) works as a security guard in Hyderabad. He falls in love with a software employee played by Kashish Khan. But his love story lands in trouble due to his job. If this was not enough, a dreaded group tries to kill Raju but he survives miraculously. Why did these goons attack Raju? What is his village backdrop? What happened there?. To know this, you have to watch the film on the big screen.

Raj Tharun is showcased in two different shades in this film and he does a good job. He is sober as a security guard and evokes satirical fun as the rich village kid in the second half. His body language is quite good in the film.

Kashish Khan makes an impressive debut and also acts well. She looks beautiful and her body language, dialogue delivery for her debut film are pretty good. Tamil actor Naren does well as the village president.

Nellore Sudarshan is very good and evokes decent fun in the first half. Ajay is seen as the jealous village head and does well. The first half and interval twist are decent. Aadarsh Balakrishna is impressive in a small yet impactful role.

After watching the first half, you get the feeling that the makers have showcased things in a decent manner. But that flow is not continued in the second as the film shifts to a village as routine comedy and forced emotions are showcased.

There is no proper conflict point in this part as Raj Tharun is only seen playing a spoilt brat in the village. The second half is lengthy and has nothing novel to showcase.

Also, the emotions showcased for actor Ravi and his role look forced. The track between Ajay and Raj Tharun also does not create much impact. It is even hard to understand why Ariana was even there in the film.

The music by Gopi Sundar is very good as all the songs are peppy and also shot well. Camera work showcases the village visuals beautifully. Dialogues are fun and so was the production design. Editing could have been better in the second half.

Coming to the director Sreenivas Gavireddy, he has done just a passable job with the film. His narration in the first half is good but he takes things for granted and does not highlight the drama as the proceedings in the second half are forced on the audience. Such village drama and politics have been showcased in many films earlier.

On the whole, Anubhavinchu Raja has a decent first half and good songs. But the second half falls flat with routine village politics. If you ignore the dull story, there are a few fun elements for which you can give this film a shot. But go in well prepared as there is nothing new that is showcased.