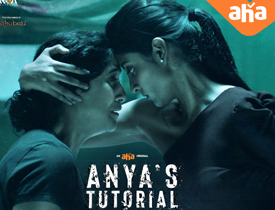 AHA is ready with one more show titled Anya’s Tutorial. Starring Regina Cassandra and Nivedithaa Satish, this show is now live in Telugu and Tamil. Let’s see how it is.

The series is a psychological thriller based on the lives of Lavanya(Nivedithaa Satish) and her elder sister Madhu(Regina). Upset with her family issues, Lavanya moves out of her home and starts living alone. This is also the time, the Covid lockdown is announced. Left with no choice, Lavanya starts an Insta handle called Anya’s Tutorial. She starts showcasing fake spooky elements in her apartment hereby catching the attention of everyone. The twist in the tale arises when Lavanya starts experiencing paranormal activities herself. Sadly for her, these horror elements have links with her sister Madhu. What is the horror angle in the life of Lavanya? How is Madhu connected to it? To know the answers, you need to watch the show.

The series is completely based on Lavanya’s character played by Nivedithaa Satish and she is just mind-blowing. The young actress gets a tailor-made role and gets ample chance to showcase her acting prowess which is superb. Be it her facial expressions or the way she showcases her confused and traumatic state has been emoted so well by the actress.

Regina Cassandra is seen in a supporting role and does well in her part. When compared to Nivedithaa, Regina gets less screen time. But still, she stands apart and makes an impression. Her character has negative shades and Regina showcases them with aplomb.

The production values of the show are top-notch as the spooky elements have been showcased well. Social media and how it damages today’s youth has been showcased well in this physiological thriller. The other supporting cast of the series is also decent.

Anya’s Tutorial is a psychological thriller directed by Pallavi Gangireddy. She has done a very good job of setting up the story in a modern premise that connects to today’s youth. But her narration lacks clarity. In order to build up the story and a few spooky elements, the clarity in narration is missed. There will be a few who will find it hard to understand the basic theme and essence of the show during the initial two episodes.

The show is started on an interesting note but gets slowed down in the second and third episodes. The subplots of the young student and the manner in which Regina’s issues with her sister are showcased lack proper clarity.

The show ends on an abrupt note only to continue for the second season. That’s why so many questions and doubts about the paranormal activities happening with Anya are unanswered. One gets a feeling that the series will have a cliffhanger kind of an ending but sadly it doesn’t.

As said earlier, production values by Arka Media are top-notch. The visuals, VFX, and BGM are superb. The locations, art direction, and costumes are amazing. Even though each episode is half an hour, one gets a feeling that the show should have been wrapped up in just five to six episodes.

Coming to the director Pallavi, she has done a passable job with the show. Her story idea and casting are interesting. The major drawback is that Pallavi should have narrated the horror elements and back story of the sisters in an engaging manner. When so much is happening in the show, one expects a solid flashback to reveal the twist but that does not happen in Anya’s Tutorial.

On the whole, Anya’s Tutorial is a psychological thriller that has striking performances and an exciting premise. The suspense build looks good but the lack of clarity in key episodes of the back story creates a lot of confusion. The show is high on production values and will be loved by those who love spooky dramas. But there is nothing out of the box that is showcased here.