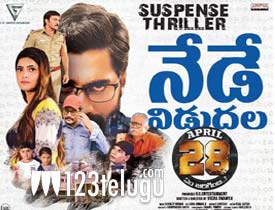 A small film titled, April 28 Em Jarigindi has caught the audience’s attention with its different kinds of promos. Directed and produced by Veera Swamy himself, the film has hit the screens today. Let’s check how it is.

To get fresh thoughts for writing his script, a famous writer, Vihari(Ranjith) goes on a road trip. At a place named Siripuram, he stops for a night halt at a hotel. Suddenly, Vihari observes some weird incidents taking place in the opposite guest house and decides to stay there to get inspiration for his spirit. This is the time Vihari finds out that there are four evil spirits who are behind all the crazy incidents. Who are these evil spirits and what is their back story? That forms the rest of the story.

Looks-wise, actor Ranjith is good and gave a decent performance as a professional screenwriter. His settled acting in a few episodes in the first half is good. Heroine Sherry Agarwal is cool and cute as a homemaker and gave an okay performance in key family scenes.

All the family members, who are introduced in the flashback episode did a decent job. Last but not least, Rajeev Kanakala is good in the key role which has two variations in it.

One of the major drawbacks of the film is that it lacks a gripping and engaging presentation. Though a few scenes in both halves will impress the audience, the pace is not continued further and becomes dull.

Though Ajay did a decent performance as a local cop, his character has not been established in a proper manner. As the film runs between limited characters, the audience may get bored after a point in time.

Director Veera Swamy’s thought process of making a different kind of horror thriller is good but his narration is not presented in the right way. If he would have worked on the script version and took care of writing an engaging screenplay, the result would have been definitely good.

Editing work by K Santhosh is decent and so is the case with the film’s cinematography by Sunil Kumar. Music by Sandeep Kumar is good as one song in the film and the background score for a few crucial scenes is apt. Production values for this low-budget film are okay.

On the whole, April 28 Em Jarigindi is a thriller that lacks proper narration. Though the presentation is done in an okayish manner, the lack of gripping and captivating screenplay stands tall as a major minus making the film a below-par fare at the box office.