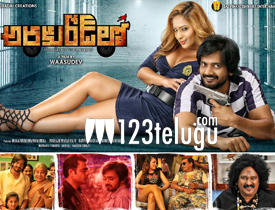 Puri Jagan’s brother, Sai Ram Shankar is trying hard to score that one hit which will bring him back in the game. His latest presentation is Araku Road Lo which has hit the screens today. Let’s see how it is.

The story is set on a highway which leads to Vizag. A serial killer starts creating havoc in this route and kills several people. On the other hand, Poturaju(Sai Ram) is a lorry driver who wants to marry a lady constable(Nikisha Patel) and keeps wooing her.

The twist in the tale arises when Poturaju accidentally meets the serial killer on the highway and starts traveling with him. What happens during the journey ? Will the serial killer finish Poturaju too ? To know the answers, you need to watch the film on the big screen.

One of the biggest plus points of the film is the interval bang. The suspense scenes that are revealed elevate the proceedings to a decent level. Post the interval also, the first twenty minutes are quite engaging. The twists that have been showcased are executed nicely.

Comedy episodes featuring Satya and Krishna Bhagwan during the first half evoke decent laughs. Sai Ram Shankar does a good job especially during the second half when things get serious. Nikesha Patel’s glamor show will surely please the front benchers. Kovai Sarala is apt in her role.

Except for a few twists that are showcased during the second half, the entire proceedings are quite dull. The screenplay takes a beating as unnecessary scenes are just weaved around these twists which take the film off track. Prudhvi’s comedy during the last half an hour does not work one bit.

The film wanders here and there until the interval and the scenes which come during this time lack any depth or meaning. After a good twenty minutes past the half way mark, one feels that the film has caught on pace. But sadly, things get disappointing once again and irritate the viewers.

Camera work is top notch as with given budget, the visuals are quite good. Editing lacks the punch but production values are okay. Coming to the director Vasudev, he has done a below average job with the film. Even though he chooses a novel story, the way he has executed the film is a bit disappointing. Except for a few twists, his narration for the rest of the film is quite boring.

On the whole, Araku Road Lo is a film with a good concept and bad execution. Except for Sai Shankar’s impressive performance and some engaging twists here and there, this film goes off track most of the time and disappoints the audience to an extent. Watch it only if you have nothing else to do.