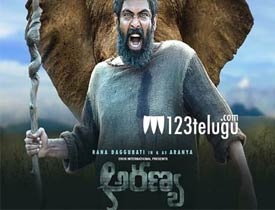 Rana Daggubati’s trilingual action adventurous drama, Aranya, has finally released in cinemas today after being in the news for nearly 2 years. Rana’s striking avatar as a forest man and the film’s forest backdrop have raised the curiosity levels among audiences. Let’s see if the film succeeded in reaching the expectations.

Narendra Bhupathi (Rana Daggubati) is a man in his fifties. He is born and raised in the Chilakalakona forest in Vizag. He shares a strong bond with the wild animals and he believes that preserving the sanctity of the forest is crucial to the existence of the animals and human beings for generations to come.

A greedy and corrupt Forest Minister (Ananth Mahadevan) plans to build a mega 500 acre township in the midst of the forest. In the process, they build a 60 km wall to prevent the elephants from entering the project site for drinking water. The rest of the story is all about Narendra Bhupathi and the elephants’ fight for survival and protecting the nature.

Rana is quite impressive as Narendra Bhupathi. Be it his rugged appearance, where he sports a thick, long bread and a lean physique, or his peculiar dialogue delivery and his agressive and eccentric body language, Rana excelled in his character whose heart beats for the wild animals and the forest.

A storyline that is rarely seen on the Indian silver screen, the stunning cinematography and sound design are the other major highlights of this adventurous drama. Tamil hero Vishnu Vishal is decent in his short role. The message that the film conveys throughout is very relevant in the present times.

While the basic storyline is quite impactful, Aranya suffers largely from a lackluster narration. Barring the main plot of a man saving the forest and the wild animals, the rest of the conflict has been dealt with in a generic and formulaic template. Several scenes are illogical and too many cinematic liberties are also taken and this is not one would expect from a film of this backdrop.

It’s understandable that Aranya is a trilingual pan-India film. However, except Rana and comedian Raghu Babu, no other notable Telugu actor is seen in a lead role and even their dubbing was shabby, resulting in an underwhelming experience throughout the film. Most of the actors are given template characterisations and they end up giving unimpressive performances.

The film’s climax is not handled in a smart and convincing manner, and the film’s main conflict is unbelievably resolved after Rana gives a long monologue. This makes you wonder if you are watching a regular commercial potboiler and not a sensible drama on deforestation and ecological balance.

Writer-director Prabu Solomon should be commended for coming up with a heartening story that’s much needed. However, he unfortunately chose a routine template of ‘a helpless man standing against mighty oppressors’ formula to drive his narrative. This diluted the very message he wanted to deliver. In fact, if we replace the forest with any city facing a similar conflict, it wouldn’t make much difference. The subplot involving Vishnu Vishal’s character and the Maoist girl (Zoya) doesn’t add anything to the story.

Like we mentioned above, the cinematography and sound design are top-class. Even the visual effects showcasing the rainforest are very realistic. However, proper care should have been taken to create the elephants using computer graphics.

On the whole, Aranya is an underwhelming adventurous drama that leaves you with mixed feelings. Barring Rana’s spirited performance and the impressive technical aspects, the film doesn’t have much to arrest the audience and make them feel for the turmoil the wild animals go through when greedy humans invade their habitat. You may watch this film for a different experience, but do keep your expectations low.