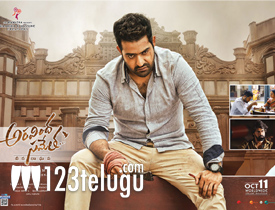 The combination of NTR and Trivirkam is one of the most awaited in recent times. The duo has teamed up for an action entertainer called Aravinda Sametha which has hit the screens today. Let’s see whether the film lives up to all its hype or not.

The story is based amidst two small faction driven villages of Rayalaseema. Veera Raghava Reddy(NTR) loses his father in these fights and leaves his village. He reaches Hyderabad and starts living with Aravinda’s(Pooja Hegde) family. But to his bad luck, the opposition gang headed by Basi Reddy(Jagapathi Babu) keeps chasing him. Rest of the story is as to how Veera Raghava fights his enemies and ends all the faction problems in his region.

NTR is a top class actor and there is no doubt in that. But what happens when an actor like him gets to act in the direction of Trivikram. The answer is Aravinda Sametha. As expected, NTR showcases superb variations in the film and gives a powerful performance. Not to forget NTR’s six-pack look which will give all the fans goosebumps moments in the theaters.

Pooja Hegde is a perfect fit in her role of Aravinda. She looks glamorous and her dubbing also suits her role well. Looks like things have changed for good as Sunil is back in a character role and ably supports NTR in the film. National award-winning actress, Supriya Pathak is justified in her role.

The interval block is handled well. The last twenty minutes of the film is emotional and ends the proceedings on a winning note. Esha Rebba gets a decent role and does well. Jagapathi Babu is top notch as the dreaded villain and his scenes with NTR during the climax have been conceived well.

Talented actor, Naveen Chandra gets an important role and he is very good. His angry expressions and the way he has faced the might of NTR without any hesitation shows his talent. One particular scene where NTR gives warning to the goons to save the heroine has been written quite well. Rao Ramesh, Subhaleka Sudhakar, and Brahmaji have done their supporting roles to perfection.

One of the biggest drawbacks of the film is that it has an outdated subject. Trivikram is known to have great scripts but that is missing here as he has taken an old story and showcased NTR in a new avatar.

Thaman gives decent songs but Trivkram disappoints the audience by not shooting them properly. The romantic track between the lead pair is a bit dull as some more fun scenes should have been added to make things interesting for the audience.

Looks like Trivikram has focused more on the emotional thread rather than the entertainment part which might not go well with a certain section of the audience. The length of the film is also an issue as it needs serious editing in both the halves.

Thaman’s background score is pretty good and elevates NTR’s action image in a big way. Production values by Chinna Babu are just spectacular as every frame and the Rayalaseema set up looks extraordinary. The fights composed by Ram Lakshman are riveting and showcase NTR in a superb manner. NTR has been styled quite well in the movie.

Special mention to the production design for the superb sets to depict the faction culture. Lyrics are meaningful and songs like Peniviti are rich in emotion. Camera work by PS Vinod is yet another added attraction and showcases the faction backdrop in a sensational light. Editing is below par.

Coming to the director Trivikram, he has done a decent job with the film. He sets the tempo high in the first fifteen minutes and slightly loses control after that. But he elevates the interval and ends the climax in a sensible way. Trivikram has showcased NTR is a superb manner and extracts a solid performance from him.

On the whole, Aravinda Sametha is an emotional roller coaster which has been narrated on a serious note. NTR gives a stand out performance and carries the film on his shoulders. Story wise, there is nothing new but Trivikram has made sure that the proceedings are content driven and do not sidetrack with unnecessary aspects. As it is a holiday season, the film will do well and please the audience who look for a perfect Dussera treat.