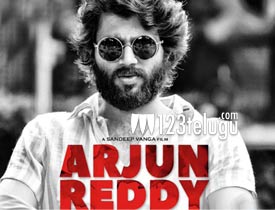 Arjun Reddy has created a superb buzz for itself from the past few days. The younger generation is going crazy about the film which has hit the screens today. Let’s see whether it lives up to its expectations or not.

Arjun Reddy(Vijay Devarakonda) is a short tempered medical college student who falls in love with his junior Preeti(Shalini). The couple shares a very close relationship for years but later break up as Preeti’s dad gets her married to a boy in her caste.

This leaves a very strong and brutal impression on Arjun Reddy who becomes an alcoholic and drug addict. Rest of the story showcases the journey of Arjun Reddy as to how he regains his senses and gets back to normal.

As the director said in many of his interviews, Arjun Reddy is surely a celebration of sadness. The breakup story of the hero is showcased in such a dark manner that it has never been touched in Telugu films before. In other words, you can say that the film is the story of a modern Devdas which is shown in a contemporary manner.

Vijay Devarakonda stuns you with his performance which is surely award winning. The way he brings the pathos and pain in his character is something else and drives the film completely. His dialogue delivery, the aggression he shows and the emotional manner in which he showcases his love is superb. With this film, his star status will surely go to the next level.

Debutante Shalini is also impressive and does her role perfectly. Special mention should go to Rahul Ramakrishna who plays the hero’s close friend. He is a good find and emotes superbly. The way his character generates comedy and also supports Vijay in every aspect is shown in a very moving manner. Kamal Kamaraju gets a decent role and so did yesteryear actress Kanchana.

The first half is quite aggressive and showcases the love story in a very interesting manner. The medical college scenes and the way Vijay behaves post his break up have been written well.

The film needs serious editing of at least 20 minutes. Too many smooches are shown which looks a bit unnecessary. The film is undoubtedly slow and one needs to have a lot of patience to sit through the proceedings.

Heroine’s character lacks a bit of clarity. The way she falls for the hero is not shown properly. Also, during the second half, too much of alcohol and drug abuse is showcased which could have been reduced to an extent. The film is clearly aimed at A centers and only a section of people will end up connecting to it.

The film is high on technical aspects and has some superb production values. Camera work is neat as it showcases the pain and depth in the proceedings in a gripping manner. Background score by Radan is awesome and elevates the proceedings in a good way. Dialogues are impressive and so was the screenplay.

Coming to the director Sandeep, he makes a rocking debut with Arjun Reddy. His writing is slick and the way he showcased Vijay’s role is just awesome. His detailing is very good as he makes the film intense and quite raw. He has a long way to go in Tollywood and will be a talent to watch out for. Had he trimmed the film, even more, the output would have been even better.

On the whole, Arjun Reddy is a new age Telugu cinema which has never been attempted before. It is intense, hard-hitting and quite adulterated with its intent. The youth will surely love this break-up saga which single handedly relies on Vijay Devarakonda’s stand out performance. This is not a family film and the masses might disown it. But the film will surely do well at A centers. All those who like different films and can bear three hours of run time, this film ends up as a pretty good watch this weekend.