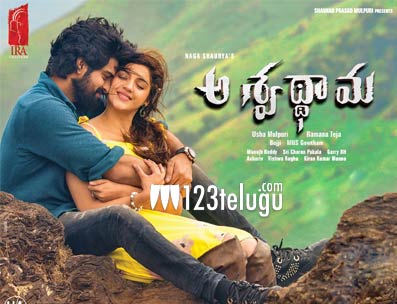 Ashwathama is a film that needs to click at any cost as Naga Shourya is going through a dull phase. The film has released today and let’s see whether it lives up to all the hype or not.

Gana(Naga Shourya) returns to India for his sister’s engagement. Right when the function is going to take place, his sister attempts to kill herself. Gana saves her and shockingly finds out that she is pregnant and the father to her child is unknown. A helpless Shourya starts investigating this case and finally nabs the culprit. How does he do all this forms the rest of the story.

Naga Shourya makes a terrific transformation from a lover boy to an action hero. His screen presence, body language, and performance in fights and emotional scenes is very good. He looks macho in an action avatar and proves that he can carry an entire action film on his shoulders. All his scenes with his sister are pretty good.

Mehreen does not have much to do but plays a good supporting role. The action episodes and interval bang is the biggest highlight and sets up the interval bang perfectly. Prince was effective in his small role and so were other cast of the film.

The first half has adrenaline pumping moments and they have been handled quite well. One of the biggest highlights of the film is the Bengali actor Jisshu Sen Gupta. He is on another level and brings a scary effect to the proceedings. The way he is brought into the film and the manner in which Jisshu performs is very good.

Special mention to the action choreography which is spot on and has been executed well. BGM by Ghibran is top notch and elevates the proceedings quite well. The family emotions are decent.

So much tension is created in the first half about who is behind the crime and this twist is revealed right after the interval. Things could have been prolonged a bit to keep the suspense intact. Because of this, the rest of the film becomes predictable.

Also, after facing so much tension to find the villain in the first half, the hero finds him with just a small clue in the last fifteen minutes which looks a bit over the top.

The second half has good moments of the villain but the hero-villain face off is just hurried up on the audience and things are ended in a jiffy. Some more investigation scenes and action episodes would have made matters even special.

Music by Sri Charan is just okay as some hit songs could have made matters better. The camera work is quite impressive as Vizag, action sequences and investigation scenes have been showcased quite well.

Dialogues are good and so was the production design. The film has a rich feel as the makers have not compromised on the making. Story by Naga Shourya is pretty good as he has kept the logics intact and his script also has a good emotional angle.

Coming to the director Ramana Teja, he makes a good debut and has made the film on a sensible note. The good part is that he did not deviate with the story line much. If he had handled the film well in the second half with crisp narration, things could have been quite impressive.

On the whole, Ashwathama is an emotional thriller with a riveting first half. Naga Shourya leads from the front and is superb in his action avatar. But the film bogs down in the second half with predictable scenes and hurried up climax. However, that does not mean the film becomes dull. It has some well packaged thrills and ends up as a decent watch this weekend.