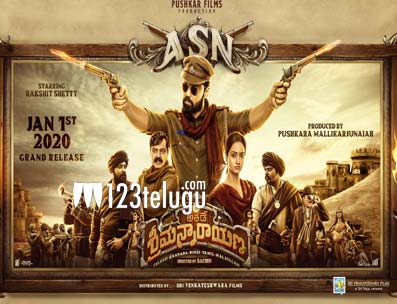 Athade Srimannarayana is one film which has been promoted a lot in the last few days. The Kannada biggie has hit the screens and let’s see how it is.

The film is all about a hidden treasure that is lost. A tribe called Adheeras is after the treasure but they cannot find it. Fifteen years pass by and a fancy cop Srimanarayana(Rakshit Shetty) comes into the picture and tries to trace the treasure. Who is this Srimanarayana? What does he have to do with the treasure? and what obstacles does he face in finding the treasure is the film all about?

The regular story of finding a treasure is given a new treatment altogether by the director Sachin and this looks good. He creates his own world and adds an interesting cop character through Rakshit Shetty which is also good. The making, visuals, and grandeur is very good in the film.

The film is like a puzzle game where every part and step itself is an important stage and one gets interested in the way things are unfolded in key areas. Rakshit Shetty is the main key in the film as his lively character lights up the screen in this otherwise slow-paced thriller. Rakshit’s body language and the way he carries his fun cop’s role was very good.

Shanvi Srivastava sheds her hot image and gets a good role and did well in her key role. The production values of the film are very good and special mention should go to the camerawork which showcases this film in a new age manner.

One of the biggest drawbacks of the film is that it is way too confusing. Some links and logics can go over the top for a normal audience. Yet another drawback is that the film is over three hours long and can test your patience in several areas. The film has heavy Kannada nativity and does not appeal to a select Telugu audience.

The narration is slow as the director takes his sweet time to unravel things. There is so much build-up in the treasure hunt that you get a feel that this treasure finding scenes will be mind-blowing. But sadly, all that does not happen as the film is rushed up during this key time. The screenplay of the film is also wayward as the director should have made things easy for the audience.

As said earlier, the production values of the film are top-notch. Music is average but the BGM was very good. Telugu dubbing is very good as the film had many historical names which have been set well in Telugu nativity. The production design, set work and art direction are just amazing in the film.

Coming to the director Sachin, he has done a good job of having a different take to this treasure hunt. His premise, starting the theme of the film is also very good. But he takes way too much time and adds many boring scenes which can put off the Telugu audience in particular who like entertainment in their films.

On the whole, Athade Srimanarayana has a good premise, interesting concept, and superb production values. But its slow pace, complex story, over three-hour-long runtime, can get boring and confusing. The film is a fantasy drama and will be liked by those who have an eye for an intelligent thrillers but for the common Telugu audience, this film is a lengthy and boring thriller with over the top scenes.