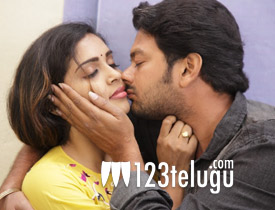 P. Sunil Kumar Reddy, who earlier directed the award-winning film Gangaputrulu has come up with yet another interesting film titled ATM Working. Starring Pawan and Karunya Chowdary, this film has released today. Let’s see how it is.

Ananth(Pawan) is a jobless graduate who decides to start up his own business with his friends. In this process, one of his friends comes up with an idea of printing fake currency.

Interested in this idea, Ananth starts the fake currency business by taking financial help from a small time politician. The twist in the tale arises when the Indian government takes the deadly note ban decision.

What will Ananth and his group do now? What happens to the fake currency they have already printed? Where does the heroine Apsara(Karunya Chowdary) feature in this setup? That forms the rest of the story.

Director Sunil Kumar Reddy should be appreciated for making a film on demonetisation which is the first of its kind in Indian films. The way he explained the advantages and disadvantages of notes ban and exposed normal public’s suffering is quite interesting.

He has expressed his own views on demonetization and what the Indian government should have done better in such situations. Heroine Karunya impresses with her looks and performs well in parts.

Mahesh and Trilok give a decent performance as hero’s friends. The first half of the film which showcases the common man’s problems post demonetization is narrated in a lighter way with some good funny moments.

Though the director came up with an interesting concept, he completely disappoints in narrating it in a gripping manner. Coming to main lead Pawan, he failed to impress the audience with his acting. The supporting cast is also one of the biggest minuses of the film. Some major characters in the film will irritate you with their overacting.

There is no proper ending for any issue which director tried to convey to the audience. The quality of the film is so bad that most of the time we feel like watching a short film. The background songs do not gel with the situations in the film.

Sunil Kumar Reddy’s idea of making a film on a national issue is appreciable but he completely failed in making the proceedings gripping. Cinematography by Sivaram is below par. Dialogues were okay. Editing work by Samuel Kalyan is not up to the mark. Looks like the film was made on a very low budget and so the production values look bad. Music by Praveen Immadi is below average.

On the whole, ATM Working has an interesting concept which is spoilt by Sunil Kumar Reddy’s lackluster execution. The film is filled with boring and below par scenes which keep deviating the good plot throughout the film. Except for some interesting scenes featuring the demonetization problem, this film has nothing much to offer and can be left alone this weekend.