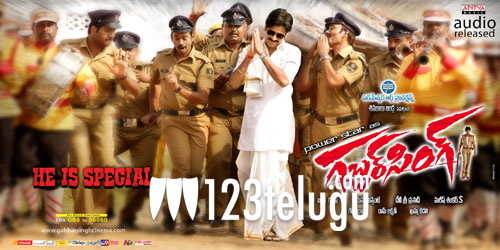 Power Star Pawan Kalyan’s ‘Gabbar Singh’ has celebrated its audio launch today and the event has been celebrated grandly. Music has been scored by Devi Sri Prasad and the film is carrying incredibly positive reports in the industry. Shruti Haasan is the heroine in this movie and Harish Shankar is the director. Ganesh Babu has produced the film on Parameshwara Art Productions Banner. Let us see how this audio album is.

This is without doubt the highlight track of the album. Devi Sri has outdone himself with the musical score and Baba Sehgal delivers a solid performance with the vocals. This will most likely be the hero’s introduction song in the film. Ramajogayya Sastry has given this highly addictive number some superb lyrics that suit Power Star Pawan Kalyan’s image perfectly. Fans will go wild with delight after listening to this song.

This melodious number starts off with a chorus and Shankar Mahadevan takes over after about 30 seconds.

DSP’s music is a mix of Indian and Western beats and it complements the mood nicely. There is good scope for a colourful picturization and you can expect Harish Shankar’s trademark visuals here. Chandrabose has done a decent job with the lyrics. A good song overall.

This bit number will go on to gain legendary status among drinkers and in ‘Kallu compounds’. Veteran actor Kota Srinivasa Rao garu has lent his

voice to this song and he does a marvelous job. His vocals are highly effective and he has rendered the lyrics with a lot of soul. Sahithi’s lyrics are simple and effective. DSP has given a very mass beat for this track and fans can expect some super steps from Pawan here.

This solo number starts off with Pawan uttering a few dialogues in his trademark style. Vaddepalli Srinivas has sung this song with a

lot of energy and his performance is perfectly complemented by a very rustic and peppy track from Devi Sri. This song will come in at a time when the hero tries to woo the heroine. Lyrics have been penned by Devi Sri himself and they are pretty entertaining. Overall, this is a very peppy song and it will become very popular among fans and mass song lovers.

This melodious number starts off with good instrumental music. Karthik and Shwetha Mohan have done a good job with the vocals and DSP’s music is nicely melodious. Bhaskara Bhatla’s lyrics are ok.

Expect the song to be shot in exotic foreign locales.This number is very pleasant to listen to and will make a very good impression the first time itself.

This is the item song of the movie and Malaika Arora Khan will sizzle in this number just like in the Bollywood version, Dabangg.

The song has ultra mass beats and Mamata Sharma has delivered a spirited performance with the vocals. Sahithi’s lyrics and simple yet provocative. Devi Sri’s music is aimed right at the front benchers and you can expect a highly energetic choreography. This number will become very popular in B and C centers.

With the audio album of Gabbar Singh, Devi Sri has scored a superb entertainer that has a nice mix of class and mass songs. The numbers are perfectly in sync with Pawan’s image and body language and they will appeal hugely to fans and mass movie lovers. ‘Dekho Dekho Gabbar Singh’ is going to be an instant chartbuster. Apart from that, ‘Dil Se’ and ‘Pilla’ are my favourites. ‘Mandu Babulam’ will gain cult status. Congratulations to Power Star Pawan and DSP. They have a winner on their hands