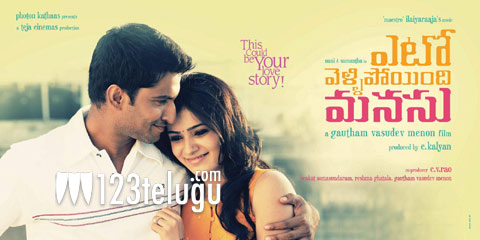 Music Maestro Ilayaraja has composed the tunes for Gautham Menon’s ‘Yeto Vellipoyindhi Manasu’ and the movie has the beautiful Samantha as the heroine. The Telugu version will see Nani playing the lead role opposite Samantha. With someone as brilliant as Ilayaraja at the helm, expectations over the audio album will naturally be high. Let us now look at the audio album and see how the songs are. Anantha Sriram has penned the Telugu lyrics for all songs.

This duet starts off with some good guitar work and Shaan takes the lead in the vocals department. Ramya does a decent job. Music is soft and melodious, complementing the romantic feeling of the song. Lyrics are soulful and soothing. This song takes time to get used to and will grow on you as you keep listening to it. A pretty decent number overall.

‘Koti Koti’ is a vintage Ilayaraja solo number that brings back nostalgic memories of the maestro’s work from many decades ago. Karthik does a good job with the vocals and lyrics are just about ok. Music is very well composed and the various instruments are combined to create a beautiful symphony. The song describes the hero’s intense feelings for his lady love. If picturized well, this song can become extremely popular.

This song catches you by surprise when you listen to it for the first time. The feel of this number is very different from the previous numbers. There is a little anger and some bitterness in this song. Sunidhi Chauhan renders the vocals with good energy levels but the Telugu lyrics somehow do not seem to be in sync with the song’s tempo. Music is ok and it is nothing special. This solo number will perhaps be picturized on the heroine at a crucial juncture in the story.

The maestro is in full flow here. Ilayaraja not only comes up with a brilliant musical score for this number, he also lends his voice for a very good impact. This song is a perfect example of the word ‘slow poison’. What seems like a very ordinary song at first, grows on you incredibly with time. Anantha Sriram’s lyrics are very good and they complement the song’s mood very well. Bala Shende does a good job with the vocals and she supports Ilayaraja well. For me, this is one of the best numbers of the album and I cannot wait to see Samantha and Nani onscreen in this number.

This number feels entirely out of place in this album. A major part of the blame goes to the very poor lyrics penned for this song. They neither make sense nor are they rhythmic. Percussion Instruments and the electronic guitar are the predominant instruments in the musical score and the song has a very western feel to it. Karthik and Suraj Jagan do a pretty average job with the lyrics. Overall, this is easily the weakest link in the album.

This is another beautiful solo number that shows Ilayaraja’s class. Karthik does a superb job with the vocals and he renders them with great feel. The song describes the hero’s romantic feelings for the heroine and will most likely be used in a scenario where the hero tries to impress his lady love despite being rejected. Anantha Sriram’s lyrics are very good for this number. Ilayaraja’s music is very pleasant on the ears and lends the song a very romantic feel. The song will take time to make a mark and it is a very good number overall.

This is a solo number that is once again let down by poor lyrics. The lyrics penned for the Telugu version do not gel well with the music or with the song’s feel. Yuvan Shankar Raja’s vocals are not too good either. The song is high on western beats and it is not pleasant like the other numbers in the album. A very ordinary song overall.

This sad number has a very good performance from Ramya. Her vocals are perfect for Samantha. The song describes the dejection felt by the heroine when her dreams come crashing down. Ilayaraja’s music is decent and the score supports the song’s mood aptly.Lyrics are soulful and have been written well. This song will strike a chord with lovers and young adults.

Verdict :  ‘Yeto Vellipoyindhi Manasu’ has a few very soothing numbers that remind you of Ilayaraja’s golden years in the 80’s and 90’s. While this album is in no way his best work, a few tracks like ‘Laayi Laayi’ and ‘Yenthentha Dhooram’ stand out for their brilliance. ‘Koti Koti’ is also pretty good. A few songs feel out of place in the album and are not upto Ilayaraja’s standard. But on the whole, YVM has Ilayaraja’s stamp all over it. The songs will take time to grow on you, just like slow poison. If Gautham Menon succeeds with the visuals, these songs will become very popular.