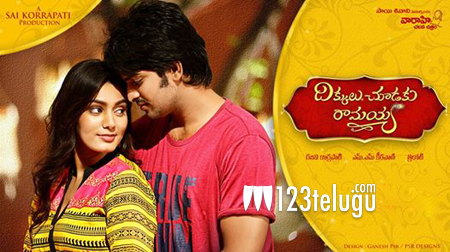 Producer Sai Korrapati, has become a force to reckon with in the industry. Not only producing big budget flicks like Eega and Legend, he has made some meaningful films like Andala Rakshashi and Oohalu Gusagusalde. His latest presentation is Dikkulu Choodaku Raamayya, which has music by the legendary M M Keeravani. The music album is out in the stores now, and let’s see how the complete album is.

Analysis:- The album starts off with the song Dheemtana, which is sung beautifully by Rahul. Tune of the song is quite peppy and will hit you instantly. Lyrics by Ananth Sreeram are youthful and quirky. What makes the song tick are the intermediate lines sung by Keeravani, which depict the story of the film.

Analysis:- Second song in the album is Chembistri. This is yet another youthful song which has a total rock based effect. Revanth’s singing gives a entertaining touch to this song, which is composed in high pitch. This song also depicts the exuberance of the hero, and Anant Sreeram’s lively lyrics elevate this unique song completely.
Song 3: Telipotunna

Analysis:- Moving on, the third song in the album is Telipotunna. An instant chart buster when you hear it for the first time, this is probably one of the best romantic songs that has come out in the recent past. Credit completely goes to Keeravani for churning out this superb track which has an amazing hook up line.

Analysis:- Fourth song in the album is Ante Premante, which depicts the side effects of love. What makes this song click is the way Keeravani has composed it in an entertaining and yet hummable manner. The female voice and the quirky lyrics only make this song a winner.
Song 5: Andari Raathalu

Analysis:- The firth song in the album is the subdued ballad Andari Rathalu. Once again, Keeravani makes sure that all the songs including this, have a simple and yet catchy tune. Lyrics are quite meaningful, and depict the pain in love. Highlight of the song are the raagas sung by the chorus which make the song soulful.

Analysis:- The last song in the album is the title bit song Dikkulu Choodukadu Raamaya. A   total mass oriented song which is situational, and depicts the purpose of the film.
Verdict:-

On the whole, Keeravani once again proves what a creative genius he is. Even in this day and age of total commercial format, he churns out a soft and yet enjoyable album. Dheemtana, Telipotunna and Ante Premante are our picks and will be even bigger hits when the film releases.