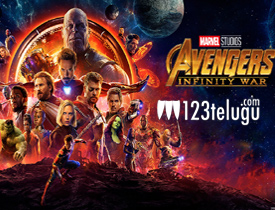 Marvel’s biggest ever creation, Avengers- Infinity War raised the expectations with some adrenaline-pumping trailers in a never before seen manner. The film will release tomorrow and we have been to a special screening of the Telugu version. Let us check whether the larger than life war between the Avengers and the deadly Thanos keep the viewers engaged.

Thanos sets on a destructive mission and intends to wipe out half of the world’s population. All he needs are 6 infinity stones through which he can attain the power to destroy every living soul without a trace. Can Avengers stop Thanos from doing the unthinkable? Is assassinating Marvel’s most powerful villain to date so very simple? Can a person single-handedly threaten the existence of humanity? To find out the answers, watch the movie on the big screen.

It would only be fair to say that Thanos is the most powerful villain that Marvel has ever created. His aggression, greed, ruthlessness send jitters down the spines of the viewers. He is so very powerful that he can absolutely slaughter any superhero with his fist. Josh Brolin breathes life into the character and exceptional CGI works that have gone into the presentation of his character deserve a special mention.

The star cast is so very huge that the entire first half has been dedicated for the introduction of some of the most loved superheroes. Robert Downey Jr. Chris Hemsworth, Scarlett Johansson, Chris Evans, Mark Ruffalo. Well, the list never really stops. These top list actors bring life into the movie with their scintillating performances.

Surprisingly, this sequel to the Avengers is all about emotions and love. The interesting thing is that the makers managed to give goosebump moments with every lead character in the movie. The Climax is superbly executed and all hardcore Marvel fans will feel quite emotional after watching the proceedings.

Well, there is no such thing as a perfect movie and Avengers: Infinity war is no exception. The screenplay is dull in a few portions of the first half. A few unwanted scenes obstruct the flow of the movie.

This outing from the Avengers franchise is unlike any other. It needs a great deal of understanding, concentration and prior idea about the lead characters and what their backstory is. Those who don’t know all this will find things a bit difficult.

Any Hollywood fans who expect out and out action entertainer will be hugely disappointed with the movie. Infinity war is all about the emotions, pain, and sacrifices, rather than a typical superhero movie that features high-end action sequences.

The director duo, Anthony Russo, and Joe Russo stayed true to their idea of keeping emotions intact. Their visionary ticked all the right boxes as the viewers are engaged in the movie right from the word go. The fact that this movie is a larger than life creation is constantly portrayed on the big screen, thanks to the immense detailing that has gone into the making of the movie.

The music director Alan Silvestri brings a great deal of authenticity to the proceedings with his BGM in emotional scenes. A key scene in the second half where Thanos has to make a grieve decision about his daughter literally shatters the heart of the viewer and a major part of this credit goes to the music track that runs in the background.

The CGI work is just stunning and lives up to all the expectations of a Marvel movie. The visualization of Thanos and other key roles has come out brilliantly and the technical team deserves the credit for this.

On the whole, Avengers: Infinity war is unlike any other Avengers movie where the protagonists come on top every time. The viewers are set for a roller coaster ride that shocks us with its steep twists and turns. However, the movie has its own share of issues and ends as a decent watch for those who have not watched the previous movies from the Avengers franchise. The climax will keep haunting you for days together and if you are the one who loves author-backed superhero movies, this one will thrill you completely. Go for it.