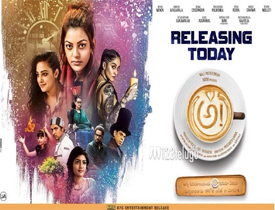 Nani’s production venture, Awe, promises to be something different from regular movies. The trailer and first look posters looked fresh and raised many eyebrows. The film has finally hit the screens today and let’s check whether it lives up to its expectations or not.

Radha( Eesha Rebba), Krish( Nithya Menen), Siva( Srinivas Avasarala) and Meera(Regina) are people with different mindsets who are held up with their own tensions in life.

It would be only fair to say that Awe offers a shocking experience to the viewers. This movie boasts of an ensemble star cast who bring a unique vibe to the movie. The lead actors carry the movie on their shoulders and do complete justice to their roles.

The opening shots in the movie are outstanding and give goosebumps to the audience. Nithya Menen is at her usual best with her subtle performance. Eesha Rebba does a fine job and portrays natural emotions really well.

Avasarala Srinivas and Murli Sharma get meaty roles and excelled in their own way. Priyadarshi adds comedy touch to the movie as he looks natural and entertains thoroughly. Right from the title cards to the ending credits, everything about this movie looks fresh and intriguing.

A few patchy scenes in the first half slow down the tempo of the movie. A few unwanted scenes involving Murli Sharma lead to a slow pre-interval block.

Awe is an out and out experimental movie which doesn’t go by any regular norms and this can affect the run of the movie in B and C centers. The movie runs on a complex storyline which may leave a few people confused about the actual plot.

Mark K Robin takes a few scenes to the next level with his thumping background score. The song that plays during the opening cards is quite good and compliments the vibrant approach of the film. Camera department succeeded in keeping the audience glued to the screen by showcasing the realistic scenes quite well.

Rich production values are an asset for the movie. Every penny spent on the movie is clearly visible, thanks to the production team. Coming to the director Prashanth, he deserves a special applause for his interesting narration. The way he handles key episodes in the movie proves he’s an promising storyteller and one exciting talent to watch out for.

On the whole, Awe is one such experiment that throws normal movie making out of the window. The movie runs on different genres and will clearly not go well with the B and C center audience. Concept-based films are the need of the hour in Tollywood and this film is for those who complain Tollywood does not make hatke movies. If a really different and unique film is all you want to see, Awe is the one to watch out for this weekend.