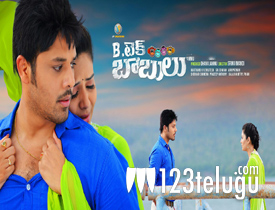 Continuing the trend of small budget films, yet another film titled B.Tech Babulu has hit the screens today. Let’s see how it is.

B.Tech Babulu is all about the story of four engineering students who randomly meet in college. Each individual has their own struggles and comes out with flying colors at the end. To know more about what struggles they go through, you have to watch the film in theaters.

The major plus point of the film is Nandu-Sreemukhi’s flashback which lasts for 15 minutes in the second half. Both Nandu and Sreemukhi performed well as a couple and their screen presence brings a lot of depth to the proceedings.

All the friends and their love interests are decent in their respective roles. Especially, Shakalaka Shankar, who acted as one of the friends is particularly good in his character. His comedy timing and dance movements in one song will impress the audience.

The basic plot of the film is ages old and has nothing new to offer. Too many subplots and lackluster proceedings will literally irritate the audience to the core.

Though Nandu-Sreemukhi’s flashback track is good it is not interlinked with the contemporary story properly. Noted comedian Thagubothu Ramesh’s role is boring and senseless.

Director Sreenu has chosen the same old friendship story and has failed in executing it with gripping narration. His screenplay and the way characters are designed are a big letdown. A few dialogues written by him in the second half are good. Editing work is just about okay as the film’s runtime is short. The cinematography is decent and a few natural locations were showcased well. Music is not up to the mark. Production values for this low budget film are decent.

On the whole, B.Tech Babulu is yet another boring friendship saga which has nothing new to offer. Though Nandu and Sreemukhi’s track is good, it is not interlinked with the story properly. The uneven screenplay and abrupt proceedings will literally irritate the audience. All those who are looking for a decent entertainer this weekend can easily skip this film and look for better options available.