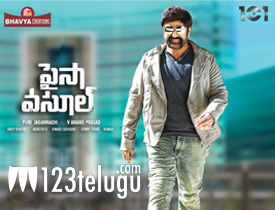 Paisa Vasool is one film which is being eagerly awaited all over as it marks the collaboration of Puri Jagan and Balayya for the very first time. The action entertainer has hit the screens today and let’s see how it is.

Bob Marley(Vikramajeet) is an Indian don who has now settled down in Europe. The entire police force is after him but no one manages to even get a clue about his deeds. Left with no choice, the cops decide to deal the case with the help of a dangerous gangster called Teda Singh(Balakrishna).

They approach Teda Singh and he too happily agrees to do the task. But the cops get a shock of their lives when they come to know that Teda Singh already has a connection with Bob Marley. Who is this Teda Singh? What does he have to do with Bob Marley? and how does he nab the dreaded gangster is the whole story about?

Paisa Vasool works only because of Nandamuri Balakrishna and his energetic performance. After a long gap, you get to see him in a mass avatar and his fans will surely love Teda Singh’s character. Puri has managed to design Balayya’s role typically for fans as the star hero mouths Puri style trade mark dialogues and punch lines which are quite superb.

Balayya’s fights have been designed quite well and have some humor attached to it. The main villain, Vikramjeet has done a good job as the dreaded don. Shreya Saran looks young and has maintained herself quite well even in this age. Her chemistry with Balayya is quite interesting.

The first half has Balayya’s mass show in full form where as the second half gets a bit serious with some emotions. All the songs sound good and have also been shot quite nicely.

One of the biggest drawbacks of the film is the routine story line. Puri has stuck to his same old format and has delivered nothing new in terms of script. The same old gangster setup, crazy hero going against them and he turning out to be someone else in the end, stuff like this is quite old and has been showcased in many films.

The selection of other two heroines is absolutely poor. Both Kyra Dutt and Muskan Sethi are unimpressive in their roles. At least, Puri should have roped in his good friend Charmi as the cop instead of Kyra Dutt who looks quite silly as the ACP.

Once the twist is revealed, the entire last twenty minutes and climax gets predictable. Puri ends the climax in a very simple manner. The way Balakrishna’s role is revealed with a twist looks a bit odd.

Paisa Vasool looks quite rich in terms of scale. The entire second half is set in Europe and it looks quite grand. Dialogues need a special mention as they have been written on a massy note and will become quite famous in the coming days. Music by Anup Rubens is decent. Background score is disappointing and does not give the necessary depth to the proceedings.

Coming to Puri Jagan, he has played a safe game with Balayya. He has rehashed all his previous films and made a story out of it. But he succeeds completely in showcasing Balakrishna in a spectacular manner. His massy touch to Balayya and the way he generates fun out of his role is the main highlight of the film.

On the whole, Paisa Vasool is clearly made to please Balayya’s fans. They will just love him in a massy avatar after a very long time. Balayya’s punch dialogues, comedy generated and stylish fights are basic assets. This film will draw a mixed response in the overseas and A centers as it has same the old routine Puri style of narration. Finally, as Balayya says in the film, he will only take a bullet for fans or family and outsiders are not allowed, this film too, will only be a joyful fare for true Balakrishna fans.