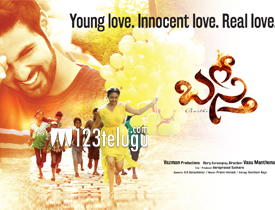 Veteran actress Jayasudha’s son, Shreayan is making his Tollywood debut with Basthi. This film which also stars Pragathi as the female lead has hit the screens today. Let’s see how it is.

The story of the film is quite simple and based between two rival groups of Ammiraju(Mukesh Rishi) and Bhikshapati (kota). Twist in the tale arises when Vijay(Shreayan) from Ammiraju’s group falls in love with Bikshapathi’s daughter Shravanthi (Pragathi).

This affair does not go well with Bikshapati’s son Bhavani (Abhimanyu Singh) who in turn takes things in hand and decides to kill the couple. Rest of the story is as to how this couple survives the deadly Bhavani and win their love.

Shreayan is ok for his first film but needs to work on his dialogue delivery and expressions. He has the height and personality and will surely get better with more experience. Pragathi is decent in her role and looks good in songs.

Interval bang is quite interesting and has been dealt nicely. Second half provides some laughs here and there. Mukesh Rishi and Abhimanyu Singh are apt in their roles and so was Kota.

First half has some decent gang rivalry which has been showcased well. Production values are decent as the makers have not compromised on the visuals.

Major drawback of the film is the age old story line. Scripts like these have been dealt many a times and have absolutely nothing new to offer. A lot of effort should have gone in to get the hero involved in the proceedings as he is just left as a spectator. Right from the scene one, this film gets quite predictable and has nothing much interesting.

Pace of the film gets slow towards the second half as some unnecessary commercial elements take centre stage. It is very hard to understand why Rashmi Gautam did the item song which also has another lead and looks vulgar. The comedy tracks featuring Ali and Sapatagiri are outright bad and have no meaning at all. Once the second half sets in, the movie looses its direction and goes wayward.

Camera work of the film is pretty ordinary and so is the art direction. Music is decent as some songs have been composed well. Screenplay is predictable in the first half and gets wayward during the second part. Editing is ok as the run time of the film is quite crisp. Coming to the director Vasu, he chooses an stale subject and completely fails to elevate the debutante in whatsoever way. He just runs through the proceedings and does a pretty below average job.

On the whole, Basthi is a film which does not give much scope for the debutante Shreayan to showcase his complete potential. Except for an interesting interval bang and decent performances by the lead pair, this film is completely let down by some very amateurish direction and has absolutely nothing new to offer. You may skip it.