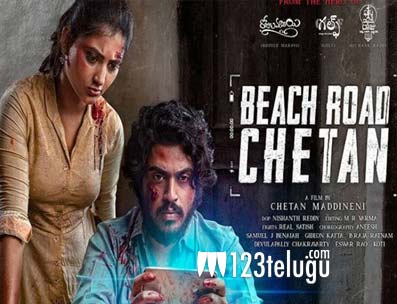 1st Rank Raju fame Chetan Maddineni is back with yet another film titled Beach Road Chetan. Apart from acting, Chetan also makes his directional debut with the film which has hit the screens today. Let’s see how it goes.

Chetan(Chetan) finds an iPhone at Vizag beach and to his surprise, the phone has superpowers in it. Using the unique facility, Chetan often goes back to his past and changes the real-life situations. The twist in the tale arises when Chetan losses his parents and lover Shruthi(Teja Reddy) at the same time. What will Chetan do now? Who is responsible for his loss? Will Chetan get back his family with the help of the magical iPhone? That forms the rest of the story.

Hero Chetan should be appreciated for taking up multiple responsibilities with this film. Coming to the acting part, there is good progress in his acting when compared to 1st Rank Raju. Chetan performed decently in the given character which had scope to emote on various occasions. His dialogue diction and screen presence are impressive too.

Looks-wise, heroine Teja Reddy is good and gave a decent performance in the given role. The last ten minutes of the film are executed in an impressive manner giving a good end to the film. All the other artists, who acted in various roles are okay in their characters.

Though the plotline of the film is nice and has scope to explore, Chetan misused the opportunity by not handling it properly. The film has many far from realistic scenes like going back to the past which may not go well with the audience.

Adding to it, the hurried up narration and a dragged screenplay will make the audience feel bored in many areas. As the crucial theme of the film is unveiled only during the last ten minutes, the film looks dragged with unwanted proceedings.

As Chetan handled departments like writing, screenplay, story, and direction, he should be lauded for the act. But in the process of handling all these crafts, Chetan somewhere neglected the writing and executing appealing scenes in the film. If he could have done the writing part effectively, the result would have been fruitful.

As the entire film is shot on iPhone 7, the locations are captured decently but the quality of the film is not that great. Editing by MR Varma is not up to the mark as the film can be chopped off close to fifteen minutes. Music is okay as the background score at times and one montage song between the lead pair in the second half are good. Production values for this experimental film are adequate.

On the whole, Beach Road Chetan has a novel point but disappoints with the execution part. Chetan’s hard work and his idea of making a feature film with the iPhone should be appreciated but the boring narration and lack of gripping proceedings make the film a below-par watch.