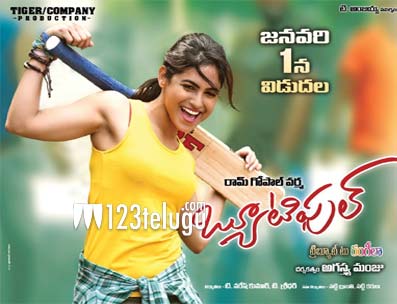 The promos of RGV’s Romantic (A tribute to Rangeela) were creating a lot of buzz in the past few days. The film has hit the screens today and let’s see whether it has anything interesting instore for us.

Rini (Nanina Ganguly) is a girl who is very content in her small little life and does not have many big goals in life. On the other hand, Priyank (Suri) is a guy who has attitude issues and does not like getting bogged down in life or bend in front of anyone. As time passes by, both these characters fall deeply in love. After a while, Rini gets a chance to become an actress and she laps it up with both hands. This is when ego issues start clashing between each other and they split. The rest of the story is as to how this couple mends their ways and get together once again in life.

The actor who played Naina’s manager did well in his role and brought a depth to the proceedings in certain areas. The camerawork in the film is pretty good as the songs have been shot in a very sensuous manner and look good on screen.

The film is fully focused on the songs and Naina Ganguly’s glamor. The story is simple and has been tweaked here and there from Rangeela and many other films. The conflict point of the film is good but the manner in which it is narrated is horrible. The film does not have strong scenes which derive the problems between the lovers.

Halfway through the film, the heroine’s character changes colors and this does not justify her logical thinking at all. There is no seriousness in the film as the first half has five songs and you can imagine how the rest of the part will be. The rest of the supporting cast is also very dull.

The production values of the film are just about okay and nothing great. Editing is pathetic and the camerawork was decent enough. The songs are okay but the background score was better. Dialogues are just about okay and the screenplay is horrible. Coming to the director Agastya Manju, looks like he has just listened to RGV’s idea of making a film with a hot heroine like Nani and showcasing her well in songs. The director has focussed only on this and let the other aspects if the air.

On the whole, Beautiful is yet another dud from RGV’s compound and does not have anything going it’s way. The film is centered around Naina Ganguly and if you are dying to see her skin show, you can happily watch all her song trailers on Youtube as there is nothing left to see on the big screen apart from these so-called sensuous songs.