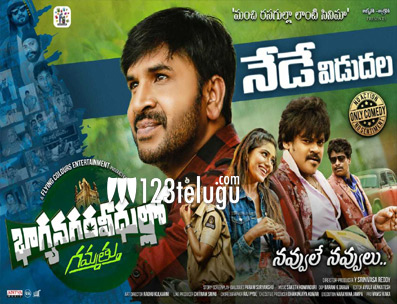 Along with a bunch of small films, noted comedian Srinivasa Reddy’s directional debut, Bhagya Nagara Veedhullo Gammathu has also hit the screens today. Let’s check how it is.

Committed to shine well in the filmy world, Srinivasa Reddy (Srinivasa Reddy) along with his friends Shakalaka Shankar and Satya try their luck in short films. In this process, they come across a drug-dealing gang and entangle themselves badly with the drug mafia. How will the three guys face further circumstances? Will they be able to prove their innocence and come out with a clean image from the case? To know that, you have to catch the film in the theatres.

The pre-climax police station scene involving all the main characters in the film is entertaining. Especially, the Rasgulla scenes with Satya and Shakalaka Shankar are hilarious. Satyam Rajesh, Vennela Kishore, and the girl, who acted as the TV reporter are okay in their roles.

Though the second half of the film has a few decent fun elements, the major default with the film is that it lacks a proper screenplay. Because of this, the entire first half goes down with a clumsy narration.

The way various characters are introduced also look foolish and irritate the audience in the first half. Instead of introducing too many characters, a simple and straight narration with the right mix of comedy would have yielded better results.

Actor Srinivasa Reddy tried his luck in the director department for which he should be appreciated but his lack of experience in the direction field is clearly visible on the screen. Instead of directing, he should have handed over the responsibilities to some talented guy and focused on writing a better screenplay.

Editing and cinematography are okay as both departments did their job sincerely. Music by Saketh Komanduri is decent as the background score clicks at times in the second half. Production values for this low budget film are adequate.

On the whole, Bhagya Nagara Veedhullo Gammathu is a disappointing comedy from actor turned director Srinivasa Reddy. Though the film has a strict few comedy scenes in the second half, the hurried first half, uneven screenplay with weak characterizations makes it an avoidable watch for the weekend.