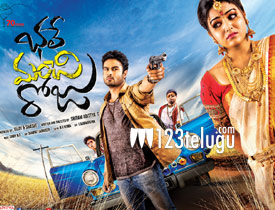 Sudheer Babu has been trying hard for one big hit in his career. Loosing no hope, he is doing some interesting films and one among them is Bhale Manchi Roju. This crime comedy has hit the screens today and let’s see how it turns out to be.

Ram(Sudheer Babu) is a depressed man because his girlfriend(Dhanya Balakrishna) cheats and leaves him for good. Upset with this, Ram decides to teach her a lesson and heads out on his journey. To his bad luck, he accidentally dashes his car and let looses Sitha(Wamiqa Gabbi) who is kidnapped by the dangerous Shakthi(Sai Kumar).

An upset Shakthi holds Ram’s best friend as hostage and demands Ram to get back Sitha to him. Left with no choice, Ram starts hunting for Sitha and right when he is about to bring her back, Sitha gets kidnapped by yet another gang.

What is this entire kidnapping drama ? How will Ram solve all his problems ? and is there a love angle between Ram and Sitha ? To know the answers to these questions, you need to watch the film on the big screen.

One of the biggest assets of the film is the intriguing story line. Credit should completely go to the director who has written an interesting screenplay and also executed the film in a racy manner. The way proceedings and twists have been unveiled is quite impressive.

Sudheer Babu is apt in his role and performs quite well. It is good to see him hold the entire film on his shoulders till the climax. He is getting better with every film and needs to be appreciated for trying something this different.

Wamiqa Gabi makes a promising debut and has decent screen presence. First half of the film is quite racy and the interval bang is the highlight of the film. Every character in the film gets good importance and all of them play their parts well.

Once again, 30 years Pruthvi impresses with his hilarious act during the climax. Posani is superb as the church father and so was Venu in an interesting role. Climax has been executed on a superb note and ends the film in a hilarious way. Background score is yet another huge asset of the film.

Pace of the film is a bit slow post the interval point. Things get deviated a bit during this time and the love story takes center stage which was a bit unnecessary. Sai Kumar’s track with Aishwarya looks cheap and over the top. The makers could have avoided it completely.

Even though the songs are good, too many of them come in a hurry. Second half has certain drags as the film looses it grip with a bit of slow narration. Entertainment dose in the first half should have been a little more. The item song featuring Venu and his friend could have been removed totally.

Production values of the film are top notch. The makers should be lauded for believing in the script and giving a young debutante such a huge project and senior artists. Editing is good but the placement of songs is bad. Camera work is top notch as the aerial shots and the way all the chases and fights have been showcased is just superb.

Coming to the director Sriram Aditya, this youngster makes a striking debut and impresses big time. He scores brownie points for taking an unusual story line and executing it in an interesting way. Though he gets wayward a bit post interval, he nicely sums it up with superb twists, racy screenplay and hilarious climax. He is surely a talent to watch out for in the future.

On the whole, Bhale Manchi Roju is an interesting crime comedy which is quite different from the current lot. Entertaining narration, superb twists and a hilarious climax are huge assets for this film. Even though this film gets a bit slow and is devoid of the regular commercial formula, it entertains you to the best of its capabilities and makes up for a good watch this weekend. Go for it.