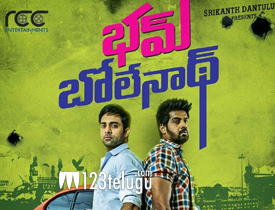 The makers of Karthikeya are back with yet another interestingly titled flick, Bham Bholenath. Starring Navdeep, Naveen Chandra and Pradeep Machiraju, this film has hit the screens today. Let’s see how it is.

The story of the film depicts the individual lives of two young men played by Navdeep and Naveen Chandra. Each of them have their own problems and need money to come out of it. They try different things but fail with each attempt.

Loosing no hope, each of them plan a huge robbery and somehow succeed in it. Twist in the tale arises when a drug addict played by Pradeep Machiraju enters their life and creates havoc.

Rest of the story is about how the entire confusion is cleared and how they come out of this mess successfully.

The premise chosen for the film is good. The makers have succeeded in invoking interesting twists for most part of the film. Navdeep is decent in his role of a jobless youth and portrays his character with a lot of conviction. Naveen Chandra looks apt and gives a solid performance.

The situational comedy showcased in the film is good. Comedians Praveen and Naveen are very good in their respective roles and bring a lot of comic relief to the film. Comedy episodes featuring Posani and Fish Venkat have also been executed well.

Interval bang and all the confusion scenes post interval are interesting. Pooja Jhaveri looks good and ably supports the rest of the cast. Pradeep Machiraju carries a full length character well and has some interesting scenes in the film.

First 15 minutes of the film are quite slow as nothing much happens during this time. After setting up the post interval scenes quite interestingly, the movie runs out of steam during the climax. Even though the climax has a few engaging moments, it has been dragged way too much. Unnecessary comedy and illogical scenes make the film out of place.

Some scenes in the second half lack clarity. The don’s character and all the comedy surrounding him gets irritating at the end. Bham Bholenath majorly suffers from good script and bad execution.

Music by Sai Karthik is good and so is his background score. Dialogues are apt and suit the mood of the film. Screenplay is interesting as all the robbery scenes have been showcased well. Editing is below par as major part of the climax could have been edited out.

Director Karthik Varma makes an ok debut. If he could have executed the climax without exaggerating it much, the output would have been far more better.

On the whole, Bham Bholenath has a few engaging moments. Interesting set up and situational comedy are basic plus points. On the flip side, a dragged out and illogical climax spoils the fun. Viewers who like to watch crime comedies might end up liking it, but the rest can try to watch it if they have absolutely nothing else to do.