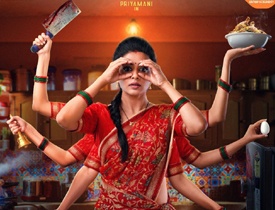 AHA is churning out some good films in the recent past. Next in line is Bhama Kalapam featuring Priyamani. The film is streaming now and let’s see how it is.

Anupama (Priyamani) is a noted Youtuber who is always curious to know what is happening in other people’s lives. She keeps an eye on a neighbor couple who are always fighting. One fine day, she goes to their house to find out what is issue and gets embroiled in a murder. If this was not enough, a dreaded gangster goes after her. Who got murdered? What is the whole gangster angle? and How did Anupama get out of it? That forms the story.

Things move on a slow note but once the murder angle comes through things become quite interesting. Bhama Kalapam completely banks on Priyamani’s performance. She gets a meaty role after a long time and excels in it. She as a desperate housewife and the one who gets embroiled in murder is brought out well by Priyamani.

Sharanya Pradeep as the maid does a good job in her supporting role. The aesthetics of the film are right and how various stories regarding the particular precious egg are drawn into the main story is nice. Kishore Kumar, who plays the church father is very good in his key role.

The film falters right after the first half. It is because of the lack of seriousness in the narrative. Priyamani gets embroiled in a murder and the manner in which she behaves is not that impressive. Also, this is the time the lead characters lack tension in their faces, and the key husband character of Priyamani is taken for granted and is put aside.

The film had so much scope for drama but is missed completely in the second half. If this was not enough, the main villain is so irritating with his overaction. Whenever he comes up on the screen, the good plot and thrills go for a toss. The film has some good scenes but they are followed by silly and illogical scenes.

Bhama Kalapam needs a special mention for its technical aspects. The production design is very good as the apartment society and culture are brought out so well. The camerawork showcasing the crime is also neat. BGM is good in some places but irritates you when key scenes come up. Coming to the director Abhimanyu, he has done a decent job with the film. If he would have added more drama and tension in the narrative things would have been better.

On the whole, Bhama Kalapam is a murder mystery with an interesting premise. Priyamani’s performance and twists are good. But the lack of proper drama and tension in the second half makes this thriller half-baked. All those who like murder mysteries can give this film a shot for its setup and storyline.