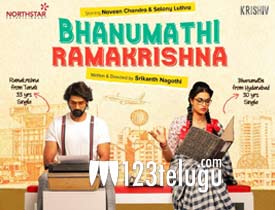 Continuing the trend of low budget films that are coming out on the OTT platforms, the latest one to hit the screens is Bhamumathi Rama Krishna. The film will be out on July 3rd on AHA and we got to watch a special screening of it. Let’s see how it is.

Bhanumathi(Salony Luthra) is a 30-year-old software engineer who is a bit confused with her emotions and leads a mechanical life. She has a bad break up and is upset with the fact that her boyfriend has dumped because of her age factor. During this difficult phase, a small-town guy named Rama Krishna(Naveen Chandra) joins as her assistant. Bhanumathi gets even more upset because of Rama Krishna’s behavior but as time passes by, she falls for him. How do two people with different backgrounds and ideologies fall in love is the whole story of the film.

The feel-good factor in the film is so nicely executed and through the narration, there is hardly any boring aspect in the film. The situations, how love develops between a unique lead pair, conversations, all this is showcased in a very realistic manner. Adding to this, the soothing BGM and music keep things effective.

The film is mostly told from the heroine’s point of view and Salony Luthra is just amazing as Bhanumathi. The way a 30 yeard woman gets frustrated with her breakup, how she develops a love for a small-town guy and shows varied emotions, Salony has done it superbly. She looks quite strict in her character but is quite adorable and is a superb find.

But the man who steals the show is Naveen Chandra. He once again proves what a superb actor he is. With Aravinda Sametha he showcased his brash side and now in Bhanumathi, he is so cute as the small-town guy. His body language, dialogue delivery, and innocence in his eyes, Naveen has portrayed it beautifully showcasing what an underrated actor he is.

The romantic situations between the couple are realistic and are no forced. The simple conversations, day to day activities where the lead pair start liking each other is shown so well. Harsha Chemudu is very good in his comic role and many bachelors can relate to his character.

Though the film’s duration of one and a half hours is perfect, after watching the film, you get a feeling that the romance should have been extended more. Also, the conflict point should have been even more effective.

As said earlier, the film is showcased more from the heroine’s side. There are many scenes that show the heroine falling for the hero but the director should have added scenes to showcase the hero’s feelings towards the heroine as well. This thread should have been exploited more and as this is not done well, the ending looks a bit forced.

Music by Shravan Bhardwaj is good but the background score is top-notch. The production values of the film are amazing and the camerawork shows Hyderabad and its urban surroundings in a superb manner. The dialogues are quite simple but very effective. The editing by Ravikanth Perepu is quite effective. The lyrics and production design are quite balanced.

Coming to the director Srikanth Noagothi, he has done a good job with the film. Though his story is quite simple, the young director has a good grip on sensibilities. He does not sugar coat any aspect just for the sake of commercial angle and shows the life of the lead pair how things happen naturally in real life. This is the best part of the film as the romance is not forced and makes up for endearing watch.

On the whole, Bhanumathi Ramakrishna is a realistic rom-com that is perfect for the OTT platform. It has some great characters and natural romance. Barring the routine story, some well-executed emotions, good music, and light-hearted comedy, make this film an endearing watch during this lockdown. Go for it.