Review : Bichagadu – Only for target audience 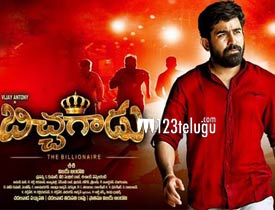 Yet another Tamil dubbed film, Bichagadu has hit the screens all over today. Let’s now see how this Vijay Anthony starrer turns out to be.

Arun Selva Kumar( Vijay Anthony) is a multi-millionaire who heads back to India to look after his family business. During his visit to one of his factories, his mother accidentally gets hurt and goes into a coma.

An upset Selva, consults all the renowned doctors in India but they fail to do anything. One fine day, he stumbles upon a swamiji who tells him that if he turns into a beggar for forty eight days, his mother will recover soon.

Left with no choice, Selva decides to become a beggar. How does he go about begging ? What are the incidents that take place once he starts begging ? and will his mother manage to recover ? All these questions manage to form the crux of the story.

Credit should go to director Sasi for writing an unique story like this. Vijay Anthony does a superb job in both his roles. Especially, the variations that he has showcased in the beggar’s role in quite entertaining. All his begging scenes with the heroine are entertaining and have been designed well.

Newbie Satna Titus makes an impressive debut and plays her supporting role quite well. The fun that is generated through all the beggars group is hilarious and evokes good laughs. Interval block and climax have been handled extremely well and showcase some meaningful dialogues.

The various emotions that need to be generated through a unique story like this are missing in the film big time. The reason for Vijay Anthony being asked to become a beggar and his transformation as one, all these scenes should been showcased convincingly.

Some scenes showcasing the murder attempt of hero’s uncle irritate the audience big time. The various problems that Vijay faces when he becomes a beggar lack conviction. The mental hospital scene also deviates from the point and gets boring.

Dialogues written are meaningful and elevate the proceedings well. Vijay Anthony’s music is decent but the re-recording that he has done is quite endearing. Camera work by Prasanna Kumar is impressive as all the scenes showcasing Vijay Anthony as the millionaire are shot wonderfully.

Coming to the director Sasi, even though he has chosen an interesting theme for his film, the way he has executed major scenes without much conviction is a bit disappointing.

Bichagadu is not the regular masala film which you generally come across daily. Even though the performances, story and comedy manage to elevate the film in certain areas, lack of emotional depth in the concept and conviction in crunch scenes makes this film a below average affair this weekend. Watch it at your will.