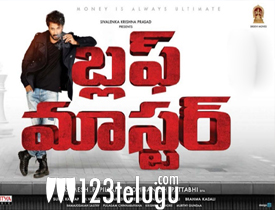 Satya Dev’s, Bluff Master has been promoted quite aggressively among this week releases. Directed by Gopi Ganesh, the film has hit the screens today. Let’s check whether it impresses us or not.

Utham Kumar(Satyadev) is an intelligent con man, who does high-profile scams by cashing on public beliefs. In that process, he meets Avani (Nanditha Swetha), a dignified and kind-hearted girl and falls in love with her. Moving ahead, Utham crosses paths with a dreaded criminal played by Adithya Menon and fixes a deal for a never before heard scam to settle down in life. Rest of the story is as to how Utham successfully completes the deal and what role do Avani and his sincere family values play in this whole set up.

Hero Satyadev is perfect in the role of a con man. His screen presence is good and Satya’s performance is impressive in a few manipulation crime scenes. Mainly, his dialogue delivery is an added advantage and it is good to see Satya get such author-backed roles in his career.

Heroine Nanditha Swetha is good in her given role as a kind-hearted girl and her acting in an emotional scene during the climax is very nice. All the scenes between the lead pair in the second half have come out well.

Adithya Menon and his gang are believable as the cruel man and do their parts decently. Comedian Prudhvi evokes decent laughs during the first half. Climax portion is executed nicely.

Adithya Menon and his gang are believable as the cruel man and did their part decently. Comedian Prudhvi evokes decent laughs during the first half of the film. Climax portion is executed nicely.

The first fifteen minutes of the film runs on a flat note with the same kind of Bakara comedy. Though the film is all about manipulating the public, a few episodes like the con man who loots crores of public money gets out of the jail just like that. All these scenes are not convincing enough.

The film’s pace slows down at regular intervals in the latter half with a few normal and not so gripping scenes. Lack of proper regular commercial elements can also be termed as the minuses of the film.

Director Gopi Ganesh succeeds to an extent in adopting the Tamil film Sathuranga Vettai to Telugu nativity. His screenplay and narration during the crucial crime blocks are engaging.

Editing is decent as the film’s runtime is within boundaries. The cinematography is good as the film’s mood is captured well with appropriate visuals. Music is okay as two montage songs featuring the lead pair are good. Background score impresses in parts. Production values are good for this limited budget film.

On the whole, Bluff Master is the story of a con man which impresses to an extent with its passable narration. Hero Satyadev leads from the front and makes his conman’s role quite interesting in the film. However, the proceedings lack proper commercial format and certain mundane scenes hamper the flow of the film which will have a limited appeal at the box office.