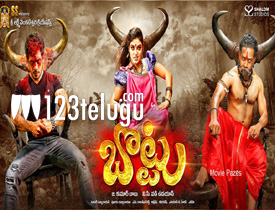 Arjun(Bharath) is a medical student who gets caught while copying in an exam. As time passes by, his body is possessed by an evil spirit called Bottu(Iniya). Because of this, Arjun transforms into a different league altogether and starts behaving weirdly. Who is this Bottu? Why is she after Arjun? and how does Arjun come out of this mess is the whole story of the film?

The concept of the film is quite interesting. The manner in which the flashback of Bottu is showcased is pretty impressive. All the scenes showcasing this episode have been executed well.

Bharath is the highlight of the film with his realistic performance. His performance in the climax is superb and brings a lot of depth to the film. The graphics done for the film are really good and bring a lot of effect on the proceedings. Iniya who plays the crucial role was good with her performance.

After starting the film on an impressive note, the flow in the proceedings goes for a toss. Apart from this, the irritating comedy does not help matters much. The first fifteen minutes in the second half are very slow.

The director missed out on a major conflict point of elevating the hero who is possessed by the evil spirit. The second half goes for a toss as except for the flashback, rest of the proceedings do not create many effects.

Director Vadivudaiyan starts the film well but he loses on major emotions and story completely. He adds so many scenes which are irrelevant and do not create an impact on the story. Editing is bad as many comedy scenes could have been avoided. Music by Amrish is just about okay but his background score was good. Production values and camerawork was decent enough.

On the whole, Bottu is a good script gone wrong kind of a film. The makers had good scope to elevate the proceedings but they did not utilize it. Except for the racy flashback and some decent performances, this film does not have the punch which is required from horror thrillers. Watch it at your own will.