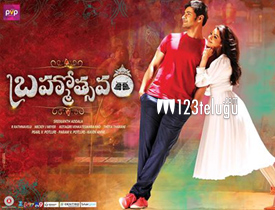 Brahmotsavam is Mahesh Babu’s biggest release till date and has been waited with beated breadth all over. Directed by Srikanth Addala and produced by PVP Cinema, this film has released all over amidst huge fan fare and hungama. Let’s see whether it lives up to its expectations or not

The story of Brahmotsavam is quite simple and is based on Satyaraj and his joint family. But one among the family, Rao Ramesh is always unhappy with the way he is always under the shadow of Satyaraj. To get even more prominence in the family, he decides to get his daughter(Pranitha) married to Mahesh Babu who is Satyaraj’s son.

Twist in the tale arises when Rao Ramesh finds out that Mahesh is already in love with Kajal. He bursts out with anger and confronts Satyaraj. An unexpected incident takes place because of this issue and disrupts the entire family. Rest of the story is as to how Mahesh takes things in hand and gets his family back on track and where does Samantha feature in all this set up.

Mahesh Babu is undoubtedly the star attraction of the film. He looks like a dream and mesmerises with his performance. He gels nicely amidst the huge star cast and is especially good during the emotional scenes. Rao Ramesh is another attraction and gets a meaty role. His mannerisms, attitude suits his character well and he does a brilliant job.

Jayasudha and Revathi are good in their respective roles. Samantha is superb in her chirpy role and her chemistry with Mahesh is just adorable. Kajal looks and plays her NRI role supremely well and is the main stay of the first half. All her romantic scenes with Mahesh have been designed supremely well.

Satyaraj is apt and does a superb job. All his scenes with Mahesh Babu and a particular scene featuring him and baby Akshara moves you emotionally. As in every Srikanth Addala film, Brahmotsavam too has some memorable family emotions. The various relationships and the way they have been set admist the modern day thinking is wonderful.

First half of the film is pretty good and has some very feel good moments. Interval bang is superb and has been executed quite well. Vennela Kishore does a good job in his role and brings good laughs in the second half.

As in every Srikanth Addala film, story takes a severe beating and the same happens with Brahmostavam too. The proceedings are quite predictable right from the word go and do not have much twists or turns.

Pace of the film is a bit slow and the regular mass audience will find it quite hard without the basic fan moments. After a very interesting first half, the proceedings during the second half take a slight beating. The film becomes a travel movie and wanders places.

Even though the concept of finding our roots is good, the way it has been conceived lacks conviction in many places. Also, Samantha’s character lacks clarity. The way she is introduced into the plot is also not convincing.

Mickey J Meyer’s music is a huge asset as all the songs have been shot wonderfully. Major credit should go to Ratnavelu for his breath taking camera work. If not for his visuals, the film would not have turned out the way it did. Every scene is so nicely light up and especially the songs and outdoor locations, they have been showcased in a superb way.

Production values by PVP are awesome as every frame looks rich and grand. Coming to the director Srikanth Addala, his screenplay is quite simple but it is his dialogues that are simple and clean. Had he worked out more on the second half and added some better family drama instead of too much travel, the out put would have been even better.

On the whole, Brahmotsavam is a film which has some decent moments going its way. This is not your regular dance and fight movie and has simple emotions. Mahesh Babu’s performance, family emotions and huge star cast are basic assets. If you ignore the predictable nature of the storyline and some boring moments during the second half, this is one film which can be easily watched with your family this summer.