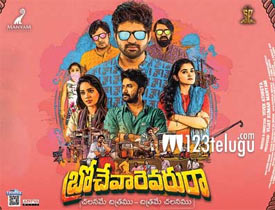 Brochevarevarura is a film which has been promoted on a good note from the past few weeks. The comedy caper has hit the screens today and let’s see how it is

Vishal(Sree Vishnu), Rocky(Priyadarshi), and Rambo(Rahul Ramakrishna) are three friends who fail their intermediate thrice and keep on wasting time. In such a situation, Mitra(Nivetha Thomas) joins their college and becomes close to them. On the other hand, Mitra has some serious issues with her dad and wants to get out of her house and seeks the help of the three friends. The gang makes a crazy plan and executes it well. But to their surprise, the events that follow create massive problems for them. What are those problems? and how did they come out of it is the whole story of the film?

One of the biggest assets of the film is the continuous dose of comedy. The first half is filled with good humor and talented actors, Sree Vishnu, Priyadarshi, and Rahul Ramakrishna are a laugh riot with their solid chemistry and comic timing.

Nivetha Thomas is always a talent to watch out for and is the perfect fit in her role. Her performance in the film is superb as she gets to portray a unique role and she does a good job in it. The kidnapping scenes and how they are narrated with a different screenplay is the highlight of the film and create superb humor.

The key factor related to the bag of money has been used in a superb manner in the film. Satya Dev was amazing in his role. His screen presence and the way Satya carried it was superb. Nivetha Pethuraj is getting better and better with every film of hers and she has done an impressive job in the film. Harshvardhan in a cop’s role was also pretty good.

After an entertaining first half, the tempo in the second half becomes a bit dull. The chasing scenes become a bit slow and are dragged. Even though the comedy generated through the proceedings is good, the plot is quite routine and nothing new.

There was a good scope to elevate the father-daughter bond but the director failed to do it. Also, too much time was taken to establish the lead characters in the film which slowed the film a bit.

Background score by Vivek Sagar is one of the biggest assets of the film. He elevated the film to another level with his score. Production values of the film look top notch as the proceedings look quite realistic. The rustic locales look good in the film. Dialogues are hilarious as all the small punches work well in the first half.

Coming to the director Vivek Athreya, he takes a different route with his second film and nicely narrates a kidnap comedy with a lot of humor and thrill. The manner in which he kept the proceedings simple and yet entertaining showcases his talent. He used all his characters pretty well in the film.

On the whole, Brochevarevarura is a crime comedy which has good fun and entertaining thrills. The fun is generated in a simple manner and keeps you hooked for the most part of the film. The lead cast performance will surely win your hearts. However, things become a bit slow and predictable in the second half but that does not stop you from having a good time watching this film. A clean comedy which will not disappoint you this weekend. Go for it.