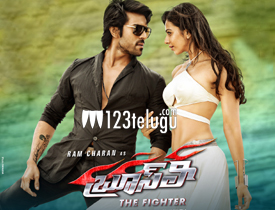 Ram Charan’s Bruce Lee is probably one of the most awaited films in the recent past. Directed by Sreenu Vaitla, this film was much in news for mega star Chiranjeevi’s cameo. After a huge round of promotions, the film is finally out now. Let’s see how it is.

Karthi(Ram Charan) is a stunt man who loves his family immensely and is ready to do anything for them. He even sacrifices his studies for his sister(Kriti Karbanda) and does all the right things to aid her studies.

Twist in the tale arises when his sister faces some undue problems from Jayraj(Sampath) and his son Deepak Raj (Arun Vijay). Rest of the story is as to how Karthi saves his sister from this mess and where does Riya(Rakul Preet) feature in all this set up.

Firstly, let’s start with mega star’s cameo. The legendary actor is a treat to watch on the big screen. The proceedings lighten up with Chiru’s entry and credit should go to Sreenu Vaitla for showcasing him in a thumping way. His cameo is a treat for all mega fans as Chiru’s screen presence is just amazing.

Ram Charan is a major asset to the film. Right from his dances to fights, Charan has done a superb job and carries the film on his shoulders. He is exceptionally good in all the emotional scenes with Kriti Karbanda. Charan’s chemistry with Rakul Preet is superb and the couple look dazzling on screen.

With Bruce Lee, Rakul has definitely reached the top league. She looks gorgeous as Riya and has been styled superbly. Her glamor coupled with her funny act is quite decent. Sampath does a decent job in his negative role. Rao Ramesh is making a habit of giving superb performances again and again.

First half of the film is pretty decent and has all the necessary elements which will be liked by everyone. Arun Vijay is superb in his negative role and makes a lasting impression in his debut film. He will be a good asset for Telugu films if he is cast in good roles.

The tempo of the film drops drastically in the second half. After setting up the film nicely till the interval point, Sreenu Vaitla brings his typical comic formula and tries to elevate the film. But sadly, none of the comedy episodes click and stretches the film a bit.

Senior actors like Nadia and Tisca Chopra have nothing much to do in their roles and have been under utilized. Story of the film gets quite predictable and too many comedians spoil the fun to an extent. Narration takes a beating during this time as the proceedings get a bit slow until mega star’s entry.

Thaman’s music is an added advantage as all the songs are superb. His background score is also good and elevates the film to a decent level. The way all the songs have been choreographed looks good and showcases Charan’s dancing skills. Screenplay by Sreenu Vaitla is decent in the first half but drags during the second.

Camera work is top notch and showcases the film in a superb light. The way all the songs have been shot needs a special mention. Production values are good and so are the fights. Coming to the director Sreenu Vaitla, he has done a decent job with the first half but could not narrate the second part in a entertaining way. However, he cleverly uses mega star’s cameo and ends the film on a positive note.

On the whole, Bruce Lee is a decent family entertainer. Ram Charan’s mature performance, stunning songs and racy first half are solid assets. If you manage to sit through the average second half, you are surely going to love mega star’s entry at the end and come out with a smile on your face.