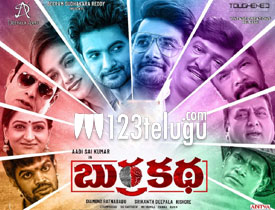 Burra Katha is one film which has been waiting for a release date for quite some time now. The film has finally released today and let’s see how the film turns out to be.

Abhiram(Aadi) is a man who is born with a rare quality of having two brains. This makes him behave like a dual personality and because of this Abhiram gets into serious problems in his life. This creates a different effect on the life of Abhiram. Things get even worse when Happy(Mishti Chakraborty) enters Abhi’s life. Rest of the story is as to how Abhi deals with his personal issues in life and also wins the heart of Happy.

Hero Aadi is very good in his complex role. He had to showcase two different variations and Aadi nailed it as Abhi and Ram. His performance in serious and emotional scenes is very good. When compared to his previous films, Aadi has improved a lot with his performance.

The main lead, Mishti Chakrborthy is also impressive in her role. Mishti’s chemistry with Aadi was quite good. The other heroine, Nyra Shah did not get much screen presence but she did her role to the best of her abilities. Rajendra Prasad was neat as Aadi’s father. His dialogues have been written well and the senior actor did the best job among all the cast. Posani, Chandra, 30 Years Prudhvi evoked a few laughs here and there.

Even though the concept looks good, the execution part was dull. The conflict between the hero and how his mind thinks in two ways was established well in many areas. Many scenes in the film have been dragged to no extent and the comedy in certain areas looks forced which sidetracks the film in many areas.

There was a good scope for emotional content to be showcased but the director missed to elevate it properly. A few romantic songs in the film could have been easily edited out to make the viewing experience better.

Production values by H K Srikanth were decent as the film looks rich in many areas. Camerawork by Ram Prasad needs a special mention as the visuals of the film are top notch. Music by Sai Karthik is not up to the mark and so was his background score. Dialogues were good and generated decent interest. Coming to the director Diamond Ratna Babu, he has done a below par job for his first film. Though he chose a novel concept, the way he narrated the proceedings was not at all convincing.

On the whole, Burra Katha is a film which has an interesting concept but the narration was no up to the mark. Even though the comedy generated does not have much connection with the story, it creates some good laughs here and there. Except this, the film has nothing much to look forward to.