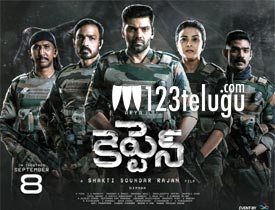 Tamil actor Arya is very familiar to the Telugu audience as well through a few films. He has now come up with a science fiction film titled Captain. The film hit the screens today. Let’s see how it is.

Vijay Kumar an orphan, hailing from Amaravati serves the Indian army as Captain. His team matters him the most and he considers them as family. The Government of India decides to reactivate Sector 42 in the North East which remained deserted without any civilian or military movement in the last 50 years. A couple of teams get killed during the scouting operation. There exists uncertainty as the reason behind these deaths remains mysterious. Vijay Kumar and his team take up the task of chasing down this enigma. How are the killings happening? Who is behind this? Did Vijay and the team solve the mystery? This forms part of the rest of the movie.

We have seen Arya give some compelling performances before. The actor repeats the same in Captain as well. His transformation is amazing and he is very much apt in the given role. He shows his mark with action sequences. Arya is almost in every frame of the film and does complete justice.

The makers have to be appreciated for trying something big. Their vision is splendid. Yesteryear actress Simran played a scientist and she is decent in it. Harish Uthaman, Kavya Shetty, and others played their part to perfection. There are some scenes which were executed nicely.

The audience will be already aware of Hollywood films along similar lines and the comparison would be obvious here. The director messed up in coming up with a good and engaging narrative. Instead what we get to see is a plain film with absolutely routine scenes. There aren’t scenes that raise curiosity and excitement. Even if we don’t compare it to any film, the entire presentation seems awful.

For any science fiction film, the VFX has to be good or at least decent to have more impact. Sadly the visual effects are very shoddy here and look very odd on the big screen. The detailing of the Alien creature is underwhelming. When it comes to climax, the less we speak, the better it would be.

Aishwarya Lekshmi played the female lead but she is hardly seen in the movie. Her role doesn’t have any significance to the selected plot point and just adds to the length. The repetitiveness is observed in few scenes even though they were decent to an extent.

The film is very short but one finds it difficult to sit through the film since we already know what happens in the next moment. This is where the skill and mastery of the makers should have come into the picture. Sadly that doesn’t happen.

BGM by Imman is terrific and pulse-pounding. He has tried his best to save the film. Cinematography is just okay. Production values are below-par. The editing team should have trimmed the film even further.

Coming to director Soundar Rajan he has picked up a plot point that looks fine on paper. But he failed to take it to the big screen. His narration fails to engage as it is filled with very ordinary scenes. When you are making a film by taking inspiration from Hollywood biggies, one expects the film to be decent if not matching them. The director should have been more cautious in this aspect.

On the whole, Captain is a badly made science fiction film that doesn’t entertain and engage either. Very good performances by Arya and others, and some decent scenes here and there are its saviors. Substandard VFX, un engaging screenplay, lack of exciting elements, and bad execution make it a tiresome watch. The attempt is appreciable but the film doesn’t live upto the expectations. You can skip this film this weekend and wait for some other good film.