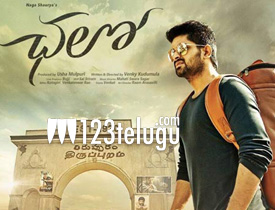 Naga Shourya, who has been lying low from the past one year is back with a family entertainer called Chalo. The film has hit the screens today and let’s see whether the young hero gets his much-needed hit or not.

Hari(Naga Shourya) is a college student who loves getting into fights. Upset with his attitude, his father(Naresh) sends him to Tirupuram which is situated between the Andhra and Tamil Nadu border. Upon his arrival, Hari falls in love with his classmate Karthika(Rashmika). But to win her love, he needs to solve the problems that are existing between the people of both the states. Rest of the story is as to how Hari handles these issues and wins his love.

One of the biggest plus points of the film is the ample entertainment which is thrown at regular intervals. Even though the plot is thin, the way the director has written the comedy episodes elevate the film completely. The film has good fun which keeps the audience entertained.

Naga Shourya shows tremendous improvement with Chalo. Not only does he look handsome, he is at ease in front of the camera. Rashmika makes an impressive debut and suits perfectly in her role. Acting wise, she is pretty good and will go a long way in her career.

Comedians carry the entire film on their shoulders. Satya does a hilarious job and keeps the momentum going in the first half. Vennela Kishore once again shines and saves the second half with his impeccable comedy timing. The one-liners written and the way plot is narrated helps the film.

As said earlier, there is nothing much in the story line. Problems between two villages and how the hero falls in love with a girl from one family and wins his love, such episodes have been showcased in many films in the past.

The problems between the village are showcased on a serious note throughout the film but the when the time comes to reveal the actual plot, things get quite silly during the climax. The flashback showcased has no weight and drags the film to an extent.

Production values of the film are very good as the village set up and surrounding areas have been created quite well. Dialogues need a special mention as they evoke superb laughs throughout. Camera work is also decent and shows the village atmosphere well. Editing is apt and so was the production design. Yet another asset of the film is peppy music score. Sagar Mahati’s music is pleasing to the ears and the way the songs have been shot also look good on screen.

Coming to the director Venky, he makes an impressive debut. Even though there is nothing much in his story, the way he has packed the film with good entertainment makes things work. The way he narrates the key elements in the plot showcase his talent. He is a director to watch out for and does a decent job for his first film.

On the whole, Chalo is a breezy entertainer which has comedy as its forte. Naga Shourya makes a good comeback and leads from the front. Even though the plot is simple, the film is filled with entertainment at regular intervals. Comedian Satya and Vennela Kishore make things work with their performance. Finally, this is a kind of film which one needs to leave the logic behind and enjoy the fun that is being showcased. If you are okay with the above-said things, Chalo ends up as a decent time pass entertainer this weekend.