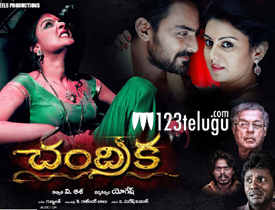 Chandrika is the latest horror thriller which has Karthik Jayram, Sree Mukhi and Kamna Jethmalani in the lead roles. Directed by Yogesh, the film has hit the screens today. Let’s see how it is.

Arjun (Karthi Jayram) is a popular artist who marries Shilpa( Sree Mukhi) and leads a happy life in a beautiful bungalow which was once the residence of renowned painter Ravi Verma (Girish Karnad).

As time passes by, Shilpa keeps getting distracted by the painting of a beautiful women Chandrika (Kamna Jethmalani) and some unusual scenes start taking place in the bungalow. Twist in the tale arises when Arjun finds that the place is haunted and his wife is under the influence of Chandrika.

Who is this Chandrika ? How is she related to the bungalow and Shilpa ? Will Arjun be able to save her wife from the evil spirit? That forms the rest of the story.

The first 15 minutes of the film is absorbing as the story starts off with an interesting point. A couple of thrilling scenes in the first half go well with the audience.

The glamour quotient of the female leads is the major attraction in the film. Sreemukhi tried her best to impress the audience and succeeded to some extent.

Kamna Jethmalani does an OK job and is eye-candy during songs and romantic scenes. Veteran actor Girish Karnad did complete justice to his role.

Hero’s character is a big minus for the film. He has no scope to display his acting skills. There is rarely a scene in the film which will frighten the audience and give them an impression that they are watching a horror film.

The routine story line is a big draw back for the film. The plot of the movie is just a mixture of numerous horror movies which surfaced in the last couple of years. Apart from the first 15 minutes, none of the scenes in the two halves create any interest in the audience.

The snail-paced narration is also a big disappointment as many scenes take unreasonable time to complete. A lot of characters go unnoticed as they are not utilized to their full potential. There is no entertainment despite having comedians like Satyam Rajesh and Thaguboothu Ramesh.

As mentioned earlier, the story of the film is penned by milking references from many horror thrillers that released in recent times. Director Yogesh utterly fails to keep things interesting with his predictable and slow narration.

Cinematography by K. Rajendra Babu is neat and a couple of songs look good on screen. Composer Gunvanth did an OK job with his music but the background score is not up to the mark. Dialogues barely have an effect on the proceedings. The production values are decent.

On the whole, Chandrika fails to impress the audience due to its routine story line and slow narration. The glamour quotient of the female leads is the only saving grace for this film which ends up as a fearless horror drama.