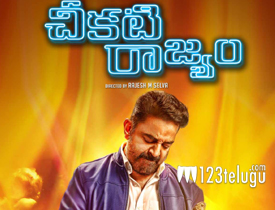 Off late, Kamal Haasan has been doing some interesting films and one among them is Cheetaki Rajyam. The action thriller has finally opened today after a huge round of promotions. Let’s now see how it turns out be.

Diwakar(Kamal Haasan) is a secret agent in the narcotics department. He along with his colleague plan a secret deal and get hold of some expensive drugs which are owned by the dreaded Vital Rao(Prakash Raj).

Left with no choice, an upset Vital Rao kidnaps Diwakar’s son and demands him to return back his parcel. Rest of the story is as to how Diwakar frees his son from the evil clutches of Vital Rao and where does Mallika (Trisha) feature in all this set up.

Kamal Haasan is the biggest asset of this action thriller. Right from his body language to his performance, everything is top class. The way Kamal gets into his character and showcases serious emotions throughout the film is just outstanding. Trisha is apt in her role and all her confrontational scenes with Kamal are very good.

Madhu Shalini looks super cute in her tiny role and does complete justice. First half of the film is quite racy and has some edge of the seat action episodes. The various twists that come during this time have also been executed well. Prakash Raj once again does a superb job in his negative role and entertains the audience with his antics.

All the action sequences have been choreographed quite stylishly. The intense fight between Trisha and Kamal Haasan looks awesome and has been shot superbly. Background score is yet another asset as it lifts the proceedings to another level.

Even though there are not many boring points, the proceedings taking their own time to wrap up during the second half. After a racy first half, narration dips slightly and makes certain scenes to go on and on.

Climax of the film is also stretched out as some unnecessary scenes spoil the feel of the film. Second half lacks the necessary twists and story of the film is quite simple and has nothing much interesting to offer.

Dialogues are neat and editing could have been a bit crispier in the second half. Screenplay is quite racy and lack of songs also help matters even more. Coming to the director Rajesh Selva, he has done a good job and narrated this French remake in a decent tone and with ample interesting moments.

On the whole, Cheekati Rajyam is a slick action thriller with interesting moments going its way. Racy first half, Kamal Haasan’s performance and some stylized action episodes are huge assets. On the flip side, a predictable story line and a slightly dragged out second half spoil things a bit. All those who like action thrillers will end up loving it big time and for the rest it ends up as just a decent watch this weekend.