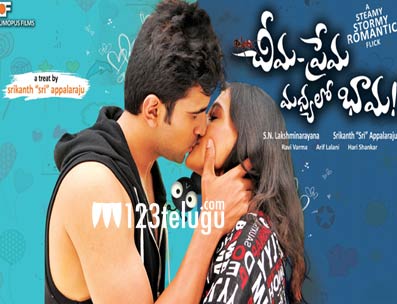 Along with Bheeshma, a couple of small films also released today to test their luck at the box office. One of them is Cheema Prema Madhyalo Bhaama. Let’s check how it is.

With the blessing of Lord Shiva, an ant turns into a human named Dheera (Amit). Later, the proceedings lead to a college backdrop where Dheera falls for a girl named Meera (Indu). Eventually, love blooms between them and turns into their marriage. What kind of hurdles will the couple face in the journey? Will the real avatar of ant be exposed? That forms the rest of the story.

The chemistry between the lead pair after stepping into wedlock in the second half has a few beautiful moments. Both Amit and Indu look so natural as the married couple. The romance between them is also handled in a subtle manner. Other artists who did a cameo in the film are just okay.

Looks-wise, the hero Amit is good and has a nice personality too. But acting-wise he needs to improve a lot in the forthcoming films. He has a good voice and should start working on it for better results. Heroine Indu is more like a girl-next-door and performed decently in her given role.

The entire first half of the film looks so artificial and has nothing new happening. An ant asking god to convert it into a human looks over the top and the entire plot lacks proper presentation. The ending of the film is terrible and it is left abruptly.

The film is a normal love life of a couple that has no novelty in it. Except for a few moments in the second half, the film has absolutely nothing to watch out for. After watching the whole film, one will wonder as to why he step into the theater by seeing in the first place.

Director Srikanth Appalaraju’s presentation lacks clarity as no one understands what exactly he tried to convey through the film. After the opening scene, the entire film turns into a normal and routine tale inserted with some unwanted struggles in a couple’s life. In one word, Srikanth’s direction and screenplay are so annoying. Editing work by Hari Shankar is decent and so is the case with cinematographer by Arif Lalni. Music by Ravi Varma is the saving grace as all the songs are nice both visually and audio-wise. Production values for this low budget film are adequate.

On the whole, Cheema Prema Madhyalo Bhaama is a boring and outdated love tale that offers nothing new. Except for a few family moments between the lead pair, the film has nothing to offer. All we suggest is to ignore the film for the weekend and look for better options.