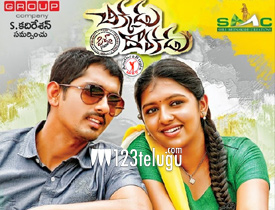 After a long hiatus, actor Siddharth has once again returned to Telugu screen with Chikkadu Dorakadu, a dubbed version of his 2014 Tamil crime comedy, Jigarthanda. The Telugu version has been awaiting its release since last year. Let’s now see how the film fared.

Karthik (Siddharth) is an aspiring film director, who, after losing a film making contest is summoned by a leading producer to come up with a gritty gangster flick. Upon knowing about a ruthless gangster named ‘Attack’ Seshu(Bobby Simha), Karthik sets out on a journey to research about him.

What kind of research does Karthik do ? Will he end up making an successful biopic on Seshu’s life ? and what problems does he face during the course of time forms the rest of the story.

The fresh and unique story is undoubtedly the major highlight of Chikkadu Dorakadu. This crime drama features certain scenes which will surprise everyone by the way there are used to evoke fun. The director must be lauded for intelligently blending the intense emotional depth and comedy scenes throughout the narrative.

Characterizations of all the actors is yet another winner for this film. Bobby Simha’s effortless portrayal as ‘Attack’ Seshu will arrest the audience’s attention till the end. Siddharth and Lakshmi Menon are quite effective in their roles and so are the rest of the actors.

The scenes that lead to the interval sequence are topnotch. The film’s second half has ample doses of comedy. The pre-climax and climax episodes deserve a huge applause.

The major minus point of the film is the distinct mood which has been carried throughout the narrative. Telugu moviegoers are new to this genre and those who love routine commercial potboilers may not patronize this film.

A few scenes involving the acting coach and his students during the second half may appear slightly boring. Logics have gone for a toss in some scenes. Apart from the lead actors, the makers seem to have not taken care in dubbing for the supporting cast.

The film stands out in its technical achievements. Karthik Subbaraj’s riveting screenplay featuring fresh scenes and innovative narrative till the end needs a special mention. The director managed to arrest the audience’s attention by throwing in an interesting twist every 10 minutes. Each frame of the film is designed to show something innovative.

Gavemic U Ary’s brilliant cinematography maintains the mood till the end. His work particularly stands out in the interval and climax episodes. Santosh Narayan’s experimental background score is quite impressive. Vivek Harshan’s editing is unquestionable.

Overall, Chikkadu Dorakadu is a fresh and never seen before genre in Telugu cinema. The film’s unexplored backdrop, and lead actors’ performances will stand out as huge assets. If you ignore the shabby dubbing work, the film will surely impress those who love to watch experimental and new age films.