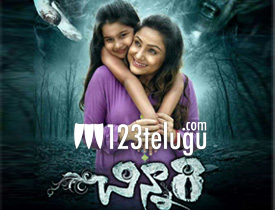 Now a days, it has become a tradition for producers to dub movies from other languages into Telugu. Continuing the trend, Priyanka Upendra’s Kannada film, Mummy Save Me has released with the title Chinnari today. Let’s see how it is

Priya (Priyanka Upendra) is a seven-month pregnant lady who shifts to Goa with her 6-year-old girl called Chriya (Yuvina Parthavi)As in every horror film, the main protagonist too starts experiencing strange and dangerous situations in her villa.

What are those dangerous and strange situations? How does a heavily pregnant Priya overcome these situations all by herself? That forms the rest of the story.

Lahith’s direction is one of the major plus points for this movie. He succeeds in narrating some good horror scenes which are the backbone of this film. The interval scenes have been designed quite well and elevate the film to a decent level.

The pre-climax and climax have also been shown on a different note, unlike the regular horror dramas. Child artist Yuvina gives an impressive performance so did Priyanka Upendra as the woman in problems.

The story and screenplay are not up to the mark as some boring and dull scenes throughout the film can get you at times. Though the different climax impresses you to some extent, confusion in the screenplay and lack of justification for some key scenes are major minus points. Also, many scenes are quite predictable as you exactly know what is going to happen next.

Director Lohith succeeded in writing horror sequences perfectly. But except for that rest of his narration is quite disappointing. Ajaneesh Loknath’s background score is very impressive. Editing by Ravichandran is good. H C Venu’s DOP is according to the film’s mood. Production values are rich and reflect nicely on screen.

On the whole, Chinnari is a film which will be liked only by those who love to watch horror films. Some interesting horror elements and good performances are basic assets. But the boring screenplay and routine scenes can irritate you to some extent and makes this film a outdated watch this weekend.