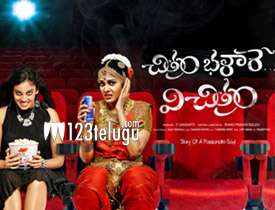 Continuing with the trend of low budget films, yet another flick titled Chitram Bhalare Vichitram has hit the screens today. Let’s see how it turns out to be.

Shiva(Manoj Nandan) is a normal middle class guy who dreams of becoming an actor. He tries hard but does not get any break. Seeing his pathetic situation, Shiva’s friend Madan(Anil Kalyan) decides to rent out his ancestral property. To his good luck a movie unit comes forward to shoot their film in the estate.

Icing on the cake is when Madan lands Shiva the hero’s role in the film. The shooting kick starts and as time passes by, strange things keep happening to the entire unit. The heroine of the film, Hansika(Chandini) gets possessed by an evil spirit and starts troubling everyone.

Who is this evil spirit ? What does it have to do with Hansika ? and How does the entire unit survive this onslaught ? That forms the rest of the story.

Certain comedy episodes which have no connection with the story entertain the audience to an extent. The director has managed to showcase some novelty during the pre-climax with some interesting scenes. Heroine Chandni does a decent job in the film and performs to the best of her capabilities.

Interval block of the film has been designed pretty well and the makers have also executed it in an interesting manner. The episode which comes during the climax has been handled nicely. Manoj Nandan and Anil Kalyan are decent in their respective characters.

One of the biggest drawbacks of the film is the way the entire film has been executed. The makers have taken a single line and stretched the film to a mammoth 2 hours.

Even though some scenes are good, the way they have been executed as a single thread fail to register with the audience. The film does not have a flow as the proceedings take a severe beating after a point.

The several horror elements that have been showcased during the second half have absolutely no clarity and create confusion for the audience. The way characters are etched out is quite loose and the makers have missed several logics.

Camera work is just about ok and so were the production values. Art direction was pretty impressive as the dreaded bungalow was showcased quite interestingly. Editing of the film is pathetic and so were the visual effects. Coming to the director Bhanu Prakash, he has done a below par job with his direction. He has taken a simple line and dragged the film over and over. The only place where he scored is during the pre-climax.

On the whole, Chitram Bhalare Vichitram is one of the most outdated horror comedies that has come out in the recent past. None of the key factors work in this film which has huge flaws in terms of execution. Except for some interesting moments during the pre-climax there is nothing much to look forward in this film and can be left alone this weekend.