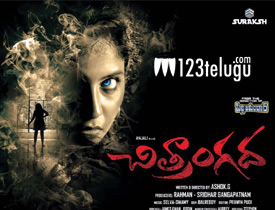 Anjali’s Chitrangada, which was waiting for a release date from a very long time has finally hit the screens today. Let’s see whether the film impresses us or not.

Chitra(Anjali), a college professor lives alone in a working women’s hostel. As time passes by, she starts behaving weirdly and keeps sexually harassing her hostel mates. Stunned by her behavior, all the girls in the hostel start vacating the premises.

After a point of time, Chitra comes to know that she is doing all this because of a deadly dream where she witnesses a man getting killed by a lady. An upset Chitra takes the help of various techniques and finally finds out that the murder spot is located in the US.

Left with no choice, she decides to go the US and solve the mystery herself. What is wrong with Chitra? What is her dream all about? and What does she find out in the US? That forms the rest of the story.

The script of the film is pretty decent. Anjali wooing women and the backstory behind it, stuff like this make up for an interesting premise. Anjali has a strong role and tries her best throughout and carries the film on her shoulders. Jaya Prakash does his doctor’s role decently.

Hindi actor, Arjuna Bajwa is very good in his negative role and impresses in whatever short time he appears. His track with Sindhu Tolani has been executed well and makes the last fifteen minutes of the film quite interesting. The production values are pretty good as most of the film is shot in the US.

Chitrangada suffers completely because of a very mediocre execution. After having a strong storyline, the director completely fails to execute things in an appropriate manner. A simple thriller like this has been made for over two hours twenty minutes and tests the patience for most of the part.

Anjali’s role looks weird in many scenes as one does not know what she is up to exactly. Also, the way she is dressed up does not help matters much. A strong actor like her looks helpless and is forced to act over the top to draw some mass applause who backfires completely.

Songs keep popping out for no reason and disturb the flow of the film. Swati Dixit is wasted in her role. Saptagiri’s comedy track irritates and should have been avoided completely.

Music of the film is horrible and so was the background score. Editing is pathetic as at least half an hour of the film could have been easily edited. Dialogues are okay and so was the production design. Camera work is pretty good as the US and other locations have been shown quite convincingly.

Coming to the director Ashok, he has done just an okay job. Looks like he convinced Anjali with a good script on paper but could not capitalize either with his narration or by extracting performances from his stars. He scores good points during the last ten minutes and makes the film interesting during that time.

On the whole, Chitrangada has a good script but is dragged to no extent making the proceedings quite lethargic. Anjali tries hard to save the film with her one man show but the lack-lustre proceedings take the film nowhere and make it a below average fare this weekend.