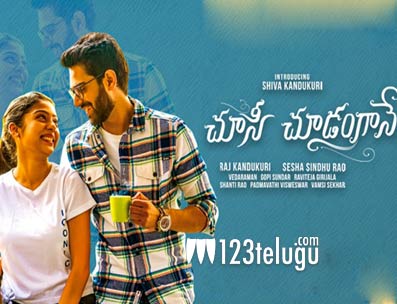 Producer Raj Kandukuri has introduced his son Shiva with today’s release Choosi Choodangane. Let’s see how the film is.

Siddhu(Shiva Kandukuri) is a mamma’s boy who acts according to her will and joins a Btech course. In his college life, he falls in love with Aishwarya(Malavika). Right when the course is all set to be completed, Aishwarya breaks up with Siddhu and leaves him in distress. As time passes by, Siddhu meets Shruthi(Varsha Bollama) and falls in love with her. Right when the couple gets ready to propose each other, a sudden twist in the love story arises. What is it and how do the couple reunite in the end is the whole story.

Shiva Kandukuri makes an impressive debut. He has been nicely trained and that shows in his performance. The young actor is good with his emotional expressions. In his scenes with his mother and as a person suffering from break up, Shiva has done a super job. If planned well, he will have a decent future.

Varsha Bollama is an experienced actor and brings all of it to this film. She is superb in her central role and does well in her emotional scenes. She brings a lot of depth to the proceedings with her sensitive act. Yet another heroine, Malavika is also impressive in her role.

Anish Kuruvilla is superb as hero’s father and so was Pavitra Lokesh. The guy who played hero’s friend also evoked some laughs here and there. The romantic scenes are decent and have been handled well.

The pace of the film is quite slow and takes its own time to come to the actual point. Though the romantic scenes between the lead pair are good, some more drama and conflict between them would have made things even better.

The hero’s role should have been established a bit more logically. He is shown in a confused state most of the time and a stronger arc should have made matters better for him. The director fails to elevate the emotional drama even though there was a good chance for it.

Production values by Raj Kandukuri are pretty impressive as the film has a natural and realistic tone. Music by Gopi Sundar is strictly okay. The camera work is top notch as the film is shown beautifully. Even though the runtime is less, a few more repeated scenes could have been toned down. Dialogues are good and so was the styling done for the actors.

Coming to the director Sesha, she has done a passable job with the film. She has written the romantic part well but the drama which was needed is missing in the film. But still, she has extracted good performances from her cast.

On the whole, Choosi Choodangane is a typical romantic love story which has some passable moments. Shiva Kandukuri and Varsha Bollama stand out but a slow narration and lack of effective drama takes the film down at regular intervals and makes it just an okay watch this weekend. Watch it only if you have nothing else to do.