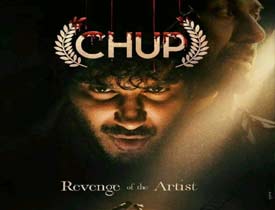 Dulquer Salman is ruling the roost with back to back films. His latest Hindi release, Chup has drawn all the attention. The film co-starring Sunny Deol has hit the screens today. Let’s see how it is.

The city of Mumbai gets a shock when a serial killer goes on a rampage. His victims are film critics. One after the other, he starts killing them for weird reasons. In comes a cop Aravind Mathur (Sunny Deol) to investigate the case. On the other hand, there is a parallel romantic track running between Danny (Dulquer Salmaan) and journalist Nila Menon (Shreya Dhanwantary) which has a connection with these killings. Who is the killer? Why is he hunting down the critics? To know the answer, watch the film on the big screen.

Dulquer Salman shocks us in a new role. Time and again, he has been re-inventing himself and does the same with Chup. His role is dark and the Mallu hero plays it with aplomb. He is intense and his dialogue delivery is also on point.

Sunny Deol makes a comeback after a long time. He is amazing as a cop and brings a lot of depth to the film. Pooja Bhatt gets a neat role and she is impressive too. Shreya Dhanwantary has a critical role and she does well in her part.

The story idea of killing film critics for the ratings they give to the films is something new and gives the audience a new backdrop. The manner in which the cops investigate the mystery looks nice. The gripping screenplay by R Balki is also one of the biggest highlights. The connection of Guru Dutt’s Kagaz ke Phool in the whole narrative is something novel.

The second half is where the problem is as the investigation becomes a bit too easy. Until then, scenes related to the cops are shown on a very realistic note. But as the film comes to the end, the dots are ended in an easy manner.

The cat and mouse game between the killer and cops should have been made more intense. As the film has gruesome bloodshed, it might not be suitable for every section of the audience.

The music and BGM are the biggest assets of the film. The manner in which Guru Dutt’s songs and pieces from these hit numbers are used in the BGM is fantastic. The visuals are gritty and the thriller gets an intense premise thanks to the arresting visuals. Dialogues are amazing and the editing is top-notch.

Coming to the director R Balki, he has done an amazing job with the film. He has taken a regular thriller but sets it in a very unique premise. The first half is filled with suspense as to who is the killer. In the second half, the cops try to catch him and all this is showcased in a strong and intense manner.

On the whole, Chup is an intense thriller which has some gritty drama and suspense filled scenes. Dulquer Salman’s crazy performance, unique setup, thumping BGM filled with arresting visuals make this film a gripping watch this weekend. Go for it.