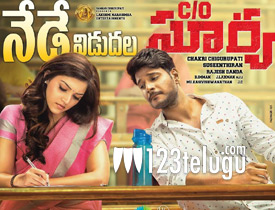 Young hero Sundeep Kishan, who is desperately waiting for a good hit has come up with a film called Care Of Suriya. Directed by Shuseenthiran, this film has hit the screens today. Let’s see whether the film manages to impress us or not.

Surya(Sundeep Kishan) is an easy going guy who leads a happy life with his friends and family. When everything seem to be going fine, a person called Samba Sivudu (Harish Uthaman) enters into his life and creates a big disturbance. What disturbance did Samba Sivudu create? and How did Surya set everything right? To know this, you have to watch the film in theaters.

Sundeep Kishan, who is continuously picking up good roles once again impresses the audience with his acting. His performance in emotional scenes is good and gives a lot of depth to the proceedings.

Bubbly beauty, Mehreen attracts us with her cute looks. Tamil actor Vikranth, who acted as hero’s close friend gave a decent performance as a daring and arrogant person.

The girl who acted as Sundeep’s sister impresses in her crucial role. Harish Uthaman, who played as the main antagonist did justice to his role. Last but not least, comedian Satya impresses us with his comedy timing and typical expressions.

Care Of Surya has got a decent storyline which could have been executed in an even better way. But the director failed to narrate it in a gripping manner. The film takes its own sweet time to enter into the main story which is one of the drawbacks of the film.

At interval point, the director reveals a suspense point and raises curiosity. But during the latter half, he fails to live up to the expectations created and narrates some illogical scenes.

Heroine Mehreen has nothing much to do with the film as she is seen hardly in three to four scenes and a song.

Director Shuseenthiran, who shot to fame in Telugu with Na Peru Siva has once again chosen the same genre script but failed to create the same magic. Editing work by Kasi Viswanathan is decent as he kept the run time of the film short and crispy. Cinematography by Laxman Kumar is good and very apt. Music by D. Imman is decent but his background score for a few key scenes is impressive. A sad and a melody song which come in the first half are very good. Production values for this limited budget film are good.

On the whole, Care of Surya is a simple film which could have been executed in an even better manner. Though there are a few high moments in the second half, the director fails to maintain the same momentum throughout. Those who like thrillers and are desperately waiting to watch a film this weekend can give this film a shot but we suggest you keep your expectations quite low.