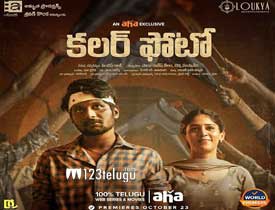 So, continuing the series of reviewing movies and shows during the lockdown period, our today’s pick is the latest Telugu film Color Photo. Starring Suhas and Chandni Chowdary, this film is available on AHA, and let’s see how it is.

Jayakrishna(Suhas) is a dark-skinned guy who falls head over heels on Deepu(Chandni Chowdary) but keeps his feelings to himself. As time passes by, a gang in his college beats him up and this issue brings Deepu closer to him. Slowly the friendship turns into love and this does not go well with Deepu’s brother Rama Raju(Sunil). The rest of the story is as to how the couple reunites after facing several problems.

Suhas turns into a full-fledged hero with this film and does an amazing job. We all know that he is a talented actor but in Color Photo, Suhas showcases his complete range. Be it his voice, expressions, and down to earth screen space, the young actor lives his character superbly. Suhas is a supremely talented actor and is the one to watch out for in the coming years.

Chandni Chowdary too does a superb job. This film gives her a lot of scope to perform and Chandni laps up the opportunity in a big way. The way she emoted throughout the film and especially in the climax shows the acting prowess of the young actress. Sunil tries a different modulation in his negative role and is decent.

Viva Harsha gets a very good role and shocks you completely with his performance. Sri Vidya, who played Sunil’s wife also does quite well. One of the biggest plus points of the film is undoubtedly Kaala Bhairava, the music director. His songs are superb and have a haunting effect on you. His BGM is also impressive.

The film is a simple love story and is based on serious conflict like discrimination of color and rich and poor. The director Sandeep handles this well but by the time the film reaches the pre-climax, things get way too serious and emotional which was not needed at all. The film has decent scenes but a few of them have been dragged for no reason especially in the first half.

The reason for which the heroine falls for the hero is not that strong and some more convincing scenes could have made things better for the audience. The love track could have also been better. The latter part of the first half is slow and takes time to get to the breakpoint which makes the film dull.

As said earlier, the music is the biggest highlight of the film. The editing is decent and so was the art direction. The camerawork is superb and showcases the bygone era in a beautiful manner. The art direction, costumes, and especially the dialogues need a special mention. The production values by Sai Rajesh are top-notch.

Coming to the director Sandeep Raj, he makes a decent debut. One can say that he has a decent grip on emotions and handles this part well until the pre-climax. He also handled the basic essence of the love story well initially but could not hold on to it later. If he could have added more grip in the drama and edited out some scenes before the interval and pre-climax, things would have been good.

On the whole, Color Photo is a romantic drama that has some amazing performances by Suhas and Chandni Chowdary. Solid music and decent emotions are basic plus points. But an overdramatic climax, routine story, and slightly dull love story take the film down here and there. Barring this, if you lower the expectations and watch this film, you might end up liking it.