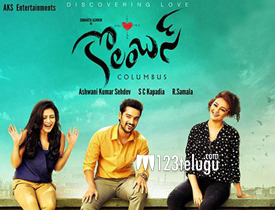 Sumanth Ashwin is slowly but steadily making his presence felt in Tollywood. After giving a mediocre hit with Kerintha, he is back with a romantic entertainer Columbus. Also starring Seerat Kapoor and Mishti Chakraborthy, this film has hit the screens today. Let’s see how it is.

Ashwin(Sumanth Ashwin) is a college going youth who falls in love with Indu(Mishti). As time passes by, Ashwin leaves all his career goals behind and lives life with only Indu’s point of view. This nature of his irritates Indu big time and she ignores him completely and heads off to Delhi.

A disappointed Ashwin follows her to Delhi. Incidentally, he gets mixed up in a murder mystery and is arrested. By the time he gets out, Indu has left him for good. This is also the time when he comes across Neeraja(Seerat Kapoor) who promises him to help find Indu.

Twist in the tale arises when both Neeraja and Ashwin start getting close to each other. What will Ashwin do now ? Whom will he end up with finally ? That forms the rest of the story.

The romantic track between Ashwin and Seerat Kapoor has been handled in a interesting way. Stories like these are quite new in Telugu films and chemistry of Seerat and Ashwin has been handled pretty well.

Sumanth Ashwin has improved by leaps and bounds. He is decent with his dialogue delivery and has done a good job in the comedy department. Seerat Kapoor is quite impressive and has done her best. Misthi has done her part well but has nothing much to do.

Second half of the film is the biggest asset. Major twists are revealed during this time with the proceedings getting a bit interesting. The scenes where hero discovers his true love have been executed cleverly.

Major drawback of the film is the weak characterization of the lead actors. Both Mishti and Ashwin’s track has not been dealt properly. Their characters have no justification and do not create any chemistry.

After a point of time, the film gets predictable and has no motive. It moves on a single agenda and that also has not been showcased well. Saptagiri’s comedy looks out of place and does not create much laughter.

Some very important characters have been misused in the film. The way Neeraja plans to re-unite Ashwin and Mishti looks way too filmy. First half has nothing much interesting to offer and is routine.

Camera work is pretty decent and showcases the film in a rich light. Production values are good and so were the dialogues. Music by Jatin is good and so was his background score. Coming to the director Ramesh Samala, he has done a average job with his narration. Even though he has chosen a novel script, his execution is below par.

On the whole, Columbus is yet another triangular love story which has its moments. Seerat Kapoor’s romantic track with Sumanth Ashwin and a passable second half are some assets. On the flip side, a routine first half and weak characterizations spoil the flow of the film. If you have an eye for youthful love stories and have nothing else to do this weekend, explore this film called Columbus. Rest can take it easy.